It’s normally applied to people who believe they’ll fail before they even begin. I think it should be more often applied in the positive sense.

People say “livin’ the dream.” This phrase is a cliche, and I wish it weren’t.

We’ve had long late night talks with Jesse about this before. He doesn’t know what he wants to do with his life after college. Lots of people don’t. My advice to him is always: figure out what you really want to do and DO IT, don’t settle. As the Avett Brothers sing, “decide what to be and go be it.” It’s not about money or success, it’s happiness that we’re talking about.

I decided I would major in graphic design in 10th grade. I realized I would likely be poor unless I married a rich boy or worked really hard and found a way to make it work.  I was voted Most Likely to Change Majors 10 Times in College. There were setbacks, of course, like any good road trip. I got waitlisted by Flagler, but I never changed my major, met Ben at Jones, which led to scholarships to the BFA program at Ole Miss, and I now own a business doing graphic design that affords us comfort and helps pay the bills. I am stubborn about things I love. I think this is the only way you can find a career you love. The details of arrival changed, the result was what I’d hoped for.

From the age I was old enough to notice cars, I knew I wanted an old Volkswagen Beetle. I was stubborn again. I worked hard and saved my pennies, and found the old Beetle I’d been dreaming about all this time. I believed it was possible, and it was. I was stubborn.

I loved reading my mama’s Coastal Living and Southern Living magazines growing up. Some little girls dream of their wedding day, but I dreamed of my someday house. I made a folder. I would tear out photos of the houses and rooms I loved. I wanted an old bungalow with white rooms and wooden furniture, artwork by local artists, old family photos all around us.

I was always getting crushes on burly, bearded men with kind hearts and the best jokes. Then one day I met him. 6 days later we exchanged “I love yous” and decided we would share a last name someday. I believed it was possible, and it was.

My point is this: if there are things you want for you life, you don’t have to take the first thing that comes along. You can be who you want to be and do what you want to do, it’s just not as easy. Do whatever it takes and you’ll learn from whatever you go through getting there (there will be bad things). This blog shines a very bright light on the blessings in my life, and you should find your blessings and shine a light on them too.

I was driving to work in the sunshine today, listening to music that I’ve not listened to since high school, and I had the epiphany that I was in the middle of my self-fulfilling prophecy. I am doing the things I imagined and hoped for as a teenager because I’ve learned to pray about every decision, pray for strength when I’m ready to quit, and until “it” happens, just fake it till you make it. If you really believe it’s so, it will be. Be your own biggest cheerleader, no matter what.

And one day you might even get to waller on a 12 foot tall vinyl picture of your husband. 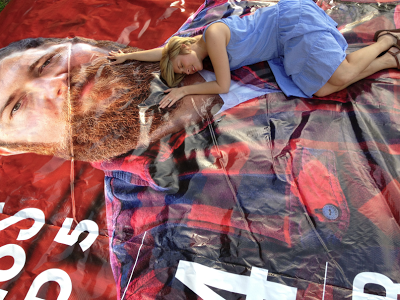