We were in New York City this weekend one year ago, and we missed the annual Christmas concert with the orchestra and choir at church, so today I was particularly excited to be there early and get a good seat. It was so incredible. My phone is very old and used up so it wouldn’t cooperate when I tried to record a video of a song, but at least I got this crooked picture that barely shows the choir! 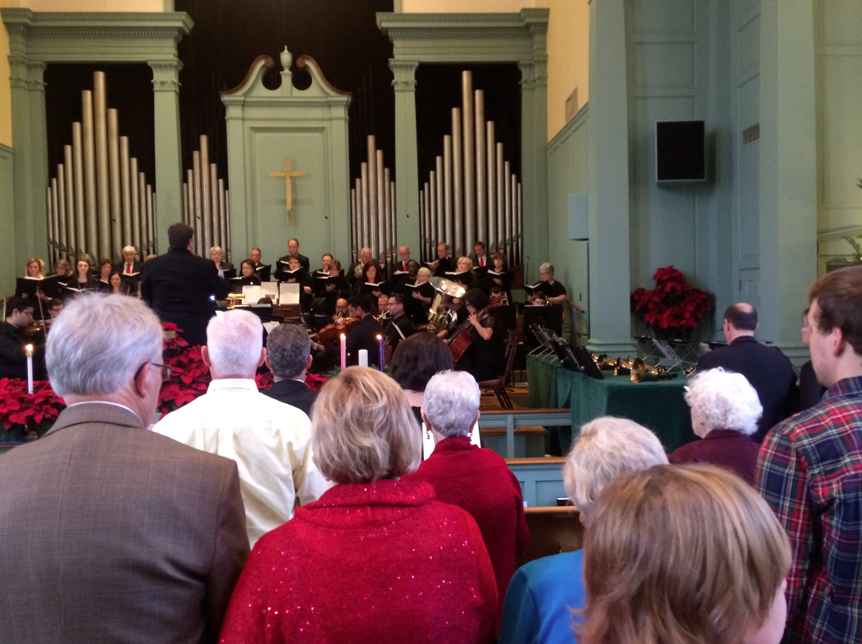 They sang all the great ones—O Come, O Come Emmanuel, We Three Kings, Joy to the World… I got chills in every crescendo. It was so beautiful, friends.

After lunch we both had to get to the shop to do some work in an effort to make tomorrow less difficult. I’m learning how tough it is to jump into owning a retail store at Christmas and Mondays are the hardest with anywhere from 20 to 30 packages to ship, but what an incredible blessing! We’re having so much fun!

When we came home from work, Ben presented me with another copper 7th wedding anniversary gift: the most precious Christmas music box:

Which reminded me of the post I read by Elizabeth Berg today on facebook. She’s my all-time favorite author, and today she shared an article she wrote for a magazine in 1990 that I think you’ll appreciate:

ON FINDING THE PERFECT CHRISTMAS GIFT
by Elizabeth Berg

I wanted to write an article about how to buy the perfect Christmas present. I thought it would help a lot of people who start getting anxious about it every year after Thanksgiving, and stalk the aisles of stores until December 24th, the way I do every year, picking up things and saying to themselves, “This? Yes, I think this. What a great idea! They’re going to love it!” followed by, “But maybe they won’t. Maybe they’ll hate it. Is it cheesy?”

I decided to do a survey and say to friends, “Okay. Clear your mind, and then give me the very first answer that occurs to you when I ask this question: What was the best Christmas present you ever got?” The first person I called was my best friend who happens to be open to clear-your-mind questions, and also has a swell memory. However, when I asked her the question, she drew a blank. She said, “Well, gee….I don’t know. You’d have to give me some time on that one.”

It occurred to me that maybe I was asking the question the wrong way. When I called my next friend, I said, “What are some of the things that compensate for the hardness of life? What makes it really worthwhile,” Then, fearful of too-fanciful answers such as “A Rolls Royce complete with mobile chef,” I added, “Small things, I mean.”
Right away, he said: “You know how cats sometimes run sideways with their backs arched? I like that.”

At first I was dismayed. Was I ever going to get any good ideas? Then it occurred to me how much truth was in his response. I told him I liked it when cats did that, too. As long as we were at it, we thought of a few more things we felt gifted by: the dusty rhythm of a jump rope. The mystery of healing. The memory of a first kiss. Johnny Mathis. The wrinkles at the back of a baby’s neck. Violets nestled at the base of a tree. A good cry at the therapist’s. Even better, a good laugh at the therapist’s. We thought of how morning sun feels on your back in the summer, and the scent of the earth when you dig deep. We mentioned peas straight from the garden, fresh ground coffee, and pies cooling on windowsills (and the fact that some people actually still do that). We liked newly sharpened pencils quite a bit. There is the inspiration of birth, winter’s first snow. There is the joy of a handwritten letter for you in the mailbox. There is the comfort of an old cotton t-shirt, a babbling brook, and watching birds build nests. There is your best friend answering her phone on the first ring when you really need to talk. There is sliding between newly washed sheets. There is the homey genius of E.B. White. There are Ginger Rogers’ dresses. There is a doctor laughing at you and saying, “No, it’s not THAT!” There is starting a good book and finishing a good book. There is everybody loving what you made for dinner. There is the crack of a bat against a ball. There is the soul-stirring size of the redwoods. There are baby pigs. There is the smell of incense at church. There are messy braids on a little girl and there are stores with old time candies like Mary Janes and wishbones. There is maple syrup. There are libraries with reading rooms with fireplaces. There are yellow school buses and shoes lined up next to a door. There is coming home.

Clearly, we could have gone on and on. The point I realized is that the reason it’s so hard to buy the best Christmas gifts is that they’re not for sale. They are the same kind of small pleasures my friend and I recalled: the smell of Christmas trees, red and green sprinkles on Spritz cookies, the mounting sense of excitement you have regardless of your position on Santa, seeing and celebrating with people you see too rarely, candles in every window on a dark winter night.

It seems that at Christmas people open up a little more, and help each other a little more than we seem able or willing to do at other times of the year. We get corny: we listen to Christmas songs we’ve heard a million times, we watch “It’s a Wonderful Life” and cry our eyes out AGAIN. We admit loudly and in many ways our normally too-quiet affection for each other. Permission to enjoy sentimentality in an age of cool cynicism seems a wonderful gift indeed.

One year when I was at my parents’ house for Christmas, a year when I was in my very early twenties and was scornful of just about everything, I was sitting on the sofa by my father when we passed out presents. He was a man who seldom expressed his emotions to me or to anyone else. I was seized rather unexpectedly by a gigantic wave of nostalgia. I took in the beauty of the decorated tree (complete with the light-bulb Santa my sister made in kindergarten in 1948), the gathering of family, the playing of “Oh Holy Night” on the radio, and it practically undid me. I was aware of how much I loved everyone there, how glad I was that we were all together again; I understood there were no guarantees for that. I went to the bathroom to cry a little, and then, red-eyed, returned to my seat on the sofa. My father looked at me and said nothing, but in his face was an acknowledgment of what I was feeling because he was feeling it, too. I moved closer to him and started opening gifts, the ones in boxes and pretty paper, which paled to the one I’d just received. That moment of mutual awareness and appreciation was the best gift I ever got.

Merry Christmas to you. May many of your gifts be small ones.

P.S.
Tonight, 11 years ago, after knowing each other for 6 days, Ben told me, “I think I’ve fallen in love with you.” And I said, “I think I’ve fallen in love with you too.” I used to wish that I could go back to that day and live it all over again. If I could have, I would. But these days, I think knowing what I know now, I’d just be wishing away our days trying to get to now, to December 2015. Every day we’ve known each other has been sweeter, more familiar, more sure than the last. We’ve changed so much, without changing at all. He’s made me a better person, who brought me back to my faith and softened my cynical heart. What a great gift it is to love someone who feels like they’ve always been there. Thank you for that, Ben.
Newer Post Older Post
Share Share on Facebook Tweet Tweet on Twitter Pin it Pin on Pinterest
Back to Journal