Skip to content
Buy One Get One FreeAmerican Made Flannels
Always American MAdeRead Our Story
Shad and I became friends in high school, though his mother was my first art teacher (every year from kindergarten through 8th grade). We had our little group of buddies and we were all REALLY into playing music. Throughout high school we sang in choir and (gasp) showchoir together, played in the school talent shows, the year-end review shows, and then he and I wound up together at Ole Miss when I transferred in 2005. He and Ben were unexpectedly fast friends, playing racquetball at the Turner Center together every week, subletting his roommate’s apartment one summer, and always dropping by the yearbook room to visit me (and maybe, possibly, my pretty roommate who was also on yearbook staff). He was always the highest achiever I knew, so it wasn’t very surprising when he became a little of a hometown hero after college. Not only was he a Truman Scholar his junior year, but also a Rhodes Scholar his senior year. In fact, he missed our wedding because he was interviewing for the Rhodes Scholar that weekend. I mean, they literally named one day of the year in Jones County “Shad White Day” because he’s such an amazing genius. Not joking. At all. 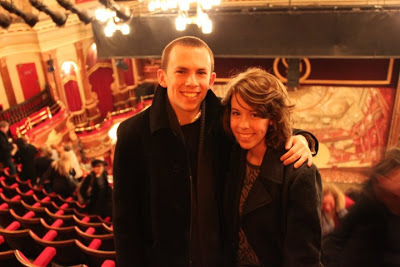 Shad and his sweet little sister Mallory took a trip to Scotland when she went to visit him. Love this family.
He’s been working on his master’s degree in Oxford, England since last fall and tonight I finally got to give my old friend a big hug for the first time in nearly a year. His success never changes him somehow, and I’m so very proud to call him a friend.
Newer Post Older Post
Back to Journal