Today was the end of all the downtown Christmas events that kick off the season, and we had more fun than we’ve ever had in years past. We’ve also never been so exhausted, in a good way.

You can’t go to the parade without first waiting in line at the YWCO with several hundred of your friends and neighbors to have all-you-can-eat pancakes and sausage. We’ve been doing this since I was born (and the rest of Jones County was doing it long before that) and few things about the Christmas season make me feel such a giddy little kid feeling. We showed up at 7:00 am on the dot since we were on a parade float that had to be in place at 8:30 and there were tons of people already there.

I was so excited to eat this once-a-year breakfast, I forgot to commemorate it until it was nearly gone. 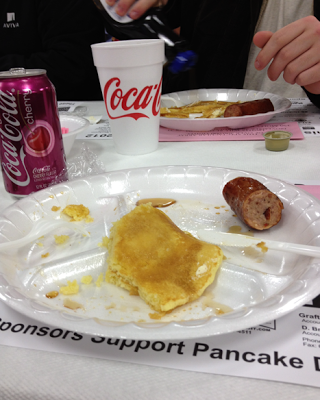 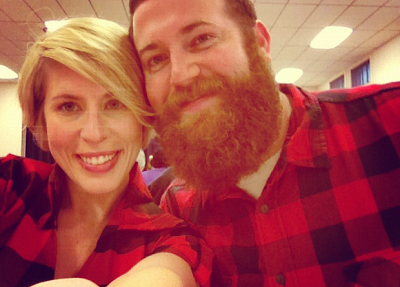 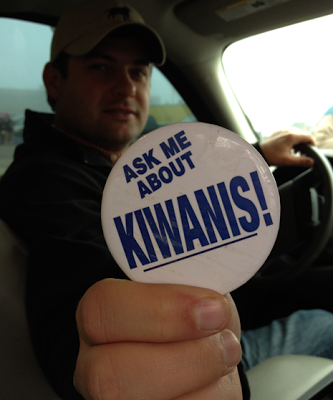 By 10:00 am, the parade began and we were Mr. and Mrs. Lumberjack for the Loblolly themed Laurel Main Street float. Twinsies! 5 teenage girls called us “adorable.” Ben told them we dress like twins every day. Awesome. 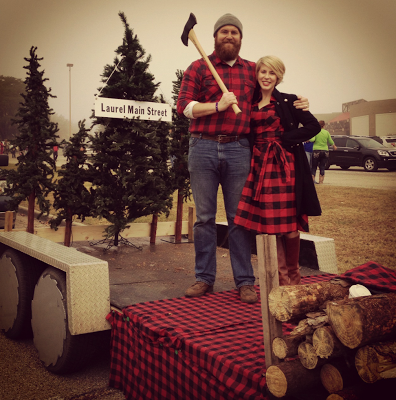 This is the first time either of us have ever been in the parade and I was tickled to death by how much fun it was. Our town is small, but we have the longest Christmas parade in the state of Mississippi. You’re very impressed right now, I know.
The thing that made it fun is the fact that every little child you pass waves and yells, “Merry Christmas!” and it’s exactly impossible not to do it right back to every one of them. 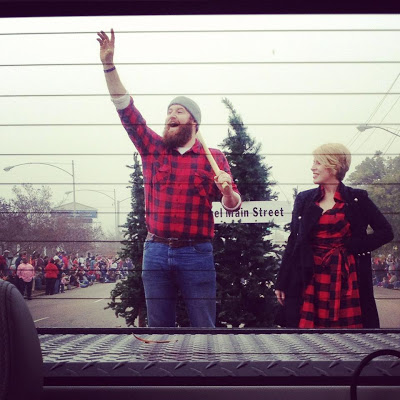 We stood the entire parade route and waved and hollered “Merry Christmas!” at every single one of them, and I bet it was well over a thousand times. If you ever feel like a scrooge, you should just holler that out over and over while waving and smiling and see what happens. Your heart overflows. 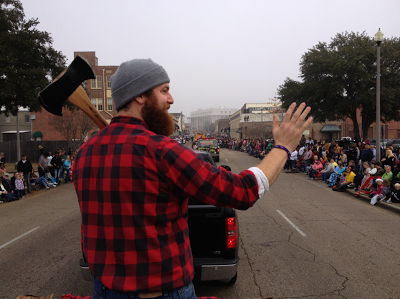 We heard a few grown-ups saying, “Hey that Paul Bunyan looks like Zac Brown, don’t he?” 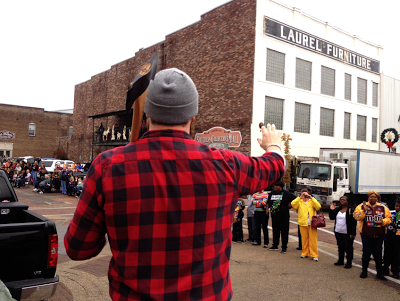 It felt like we were on the movie Big Fish (my all-time favorite movie without a doubt), at the end when Edward Bloom is in the parade of his life and everyone he’s ever known is there—all of them just so happy to see him. 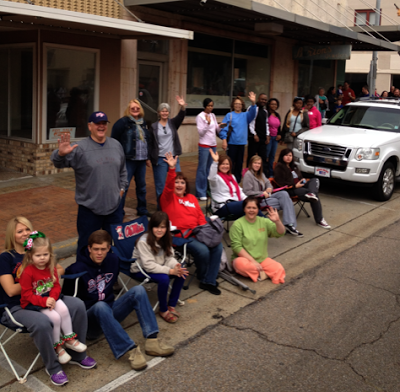 Randy’s got a seriously rad beard going on. He saluted us with a hot coffee. 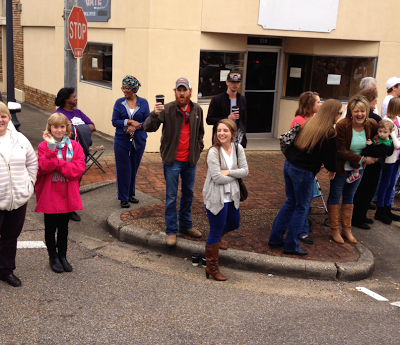 Aunt Cheryl and Connor, who was NOT into all the loudness: 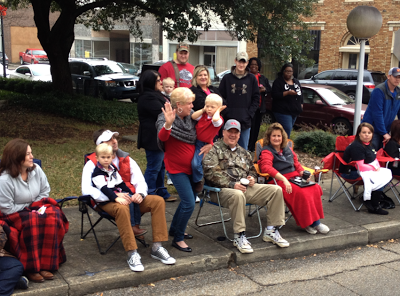 The Trest crew was on their rooftop and sidewalk and I was so excited to see them there, as if they would be somewhere else on pancakes and parade day? 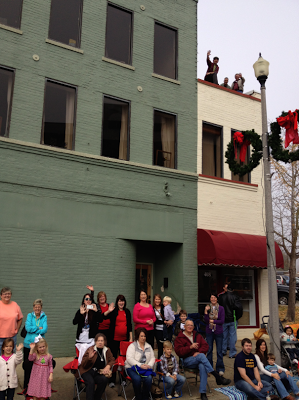 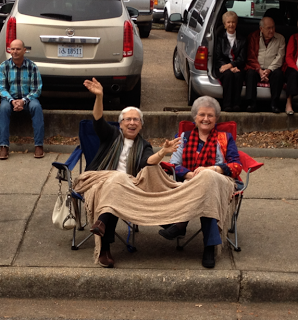 All of our church family and neighborhood friends were near First Methodist and First Trinity, screaming and clapping for us. Talk about a warm and fuzzy feeling! 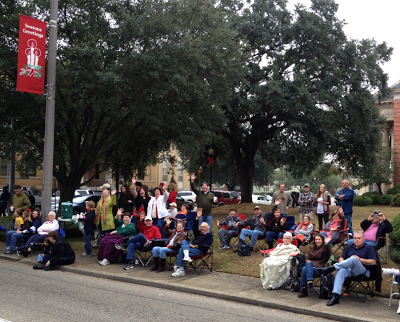 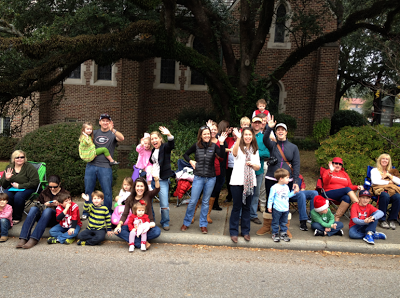 This picture of Mark Tucker could be my favorite one from the day: 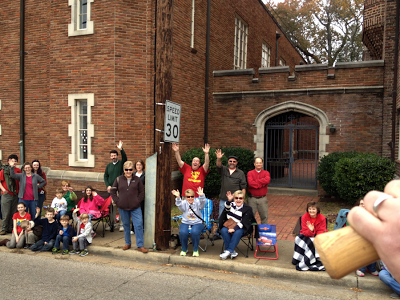 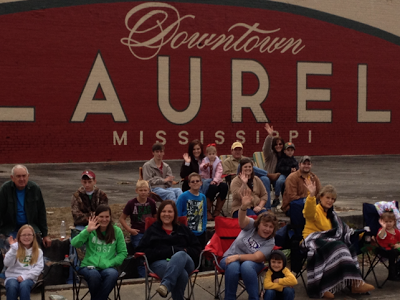 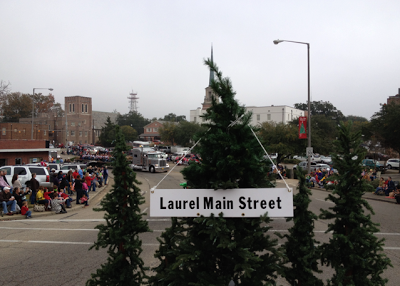 The parade has never been so much fun as it was today. It felt exactly like Christmas should. Full of love and excitement.

When we got home and could finally just rest, I couldn’t wait to go to the porch bed and spend some time there doing nothing. I read my new book, The Used World, while Ben wrangled all the leaves that have taken over our yard. It felt like early spring outside even though Christmas is just days away. I could barely keep my eyes open. 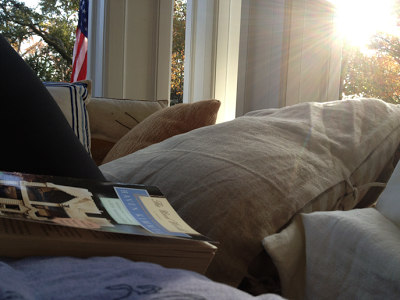 And the pups stood guard and watched the world go by. 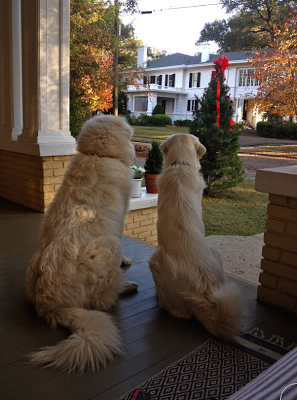 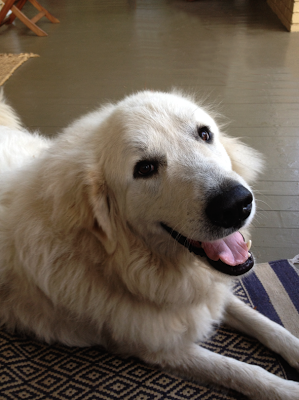