I read Life of Pi a few weeks ago and haven’t been able to get it out of my head since. A former Lucky Luxe bride mailed it to me as a gift and told me that I had to read it so I would understand what made her feel close to God.

I wasn’t interested in reading it at all, initially. I thought it was about Indian culture set 200 years ago or something because the kid in the life boat on the cover is wearing a loin cloth or something (false, set in the 1970s, and he’s a totally American sounding Indian boy). Second, a tiger is in that lifeboat and well, that’s stupid (there’s a very good explanation for that tiger). Then I read it. And I was fascinated by the mental intensity and the color and the narrative and how much God and Christ had to do with it all. It wore me out every night before bed, being in that boat with Pi for so many months. At first I didn’t understand the ending at all. In fact, I hated it.

I texted my friend, “What the heck was that ending about?”


She explained and my third eye opened up. It turns out, the literal ending meant WAY more than what it sounds like. It’s all theological. If you’ve read it, maybe you know what I mean?

Tonight we watched the movie and it was almost exactly like the book, and everything was just as I envisioned it. 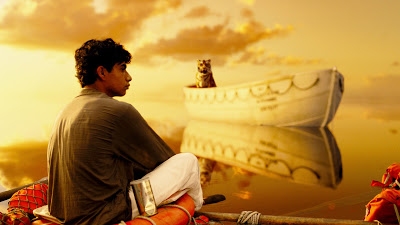 Have you read it? What do you think the ending meant? I don’t want to spoil it so I won’t say. I’d just love to hear your thoughts!