Something I neglected to mention yesterday was that the doctor said that he had a slight suspicion about Mae Mae’s pancreas. That she definitely had a bad gallbladder, but a mass in her pancreas could cause similar illness. But we wouldn’t know until today. She was wringing her hands with worry, and mama too. They were so anxious about what today would hold.

She was in agony this morning in the pre-op room, waiting for the surgery that would save her. She was in renal failure and running a fever, with blinding pain, nauseated, her skin yellow with infection, and in a feverish, hushed whisper she just kept breathing, “Help.” To no one in particular, to everyone, to the doctors and to mama and Ben and me, but most of all I think to God. Her voice was so small, she sounded like a little child. We were crushed watching her drift in and out of sleep, so very sick and we couldn’t help her at all. We could just be there.

The surgery happened and we found out that she definitely does not have cancer, and they did remove a gallbladder that was 5 times larger than a normal one. The stone it produced was so big, they weren’t able to remove it with this surgery and tomorrow she goes back for another one. She’s so worried about what her insurance will cover, and how much it’s going to cost. We’re only worried about her.

This was blowing all over me today:

Religion, the kind that is pure and faultless before God the Father, is this: to care for orphans and widows in their affliction, and to keep the world from contaminating us.
James 1:27


It stepped all OVER me. 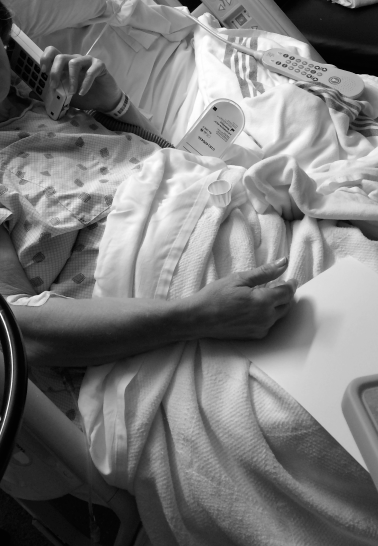 These “widows” seemed generic to me until today. It’s very easy to think of “widow” as a generic term—women who were frail and broken at first, but surely grew tougher the longer the other side of the bed was empty. These are self-sustaining superwomen, right? Until you grow up knowing my precious Mae, a woman who loves God with all of her heart and mind, who is silly and nurturing, who is obsessed with country music, who eats so many carrots they turn her orange, who brought me a gallon of blueberry juice when I got out of the hospital last month, who does her own yard work every week, who taught me the history of Disney, who is dilligent about her nightime face cream, who has never complained a day in her life, who is a full-time caretaker at a home for mentally ill women who also happens to have two 8″ metal rods in her back from a car accident 9 years ago, then to see her like she was today—”widow” is easy to think of in a religious fog, without any personal application. She’s tough as nails and good as gold. She’s been through more in her life than I could ever fathom. That’s for sure. But it changes everything to see her on a day like this. She can’t make it alone. She needs friends and family in times like this. I’m so glad that includes me.

I’m feeling like a wrung out towel today—relieved and exhausted, but most of all, thankful for the illustration God put on the day. I needed to learn this lesson.