The biggest intent of today was to go around picking up any goodies we’ve found this week for home and for family—stuff we know they’d like if they could be here. I didn’t take pictures of that stuff though, because it’s a surprise. But here’s what happened today.

I had a gourmet popsicle from The Hyppo. It was made from just strawberries and basil. It was so good it nearly killed me. I’ll be making these when I get home. Even if it’s just in ice trays! 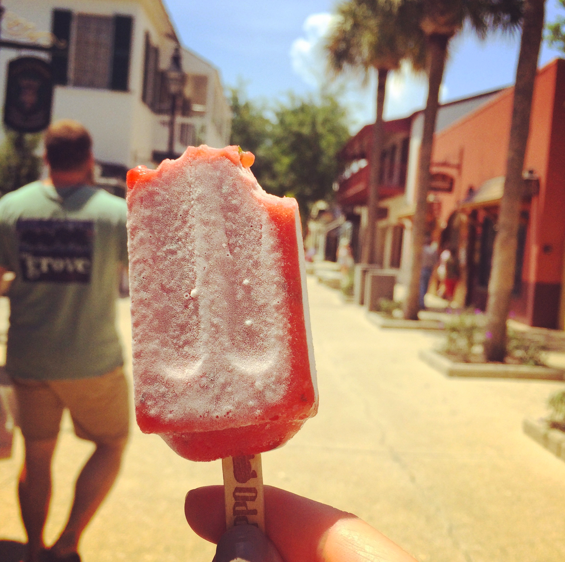 We went out to the country a little ways in search of old signage for Ben’s garage. Didn’t find that, but I did find a ‘partner desk’ that’s double sided. You can sit on either side. It was so cool. And expensive. So it stayed right where we found it. 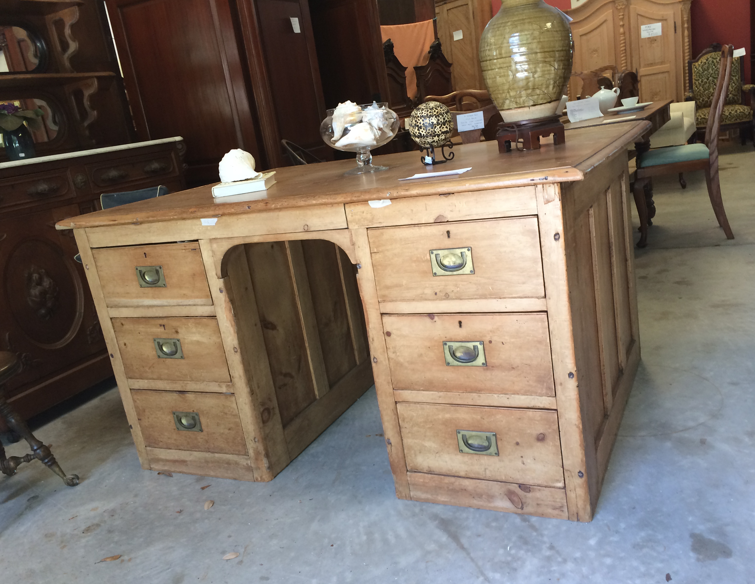 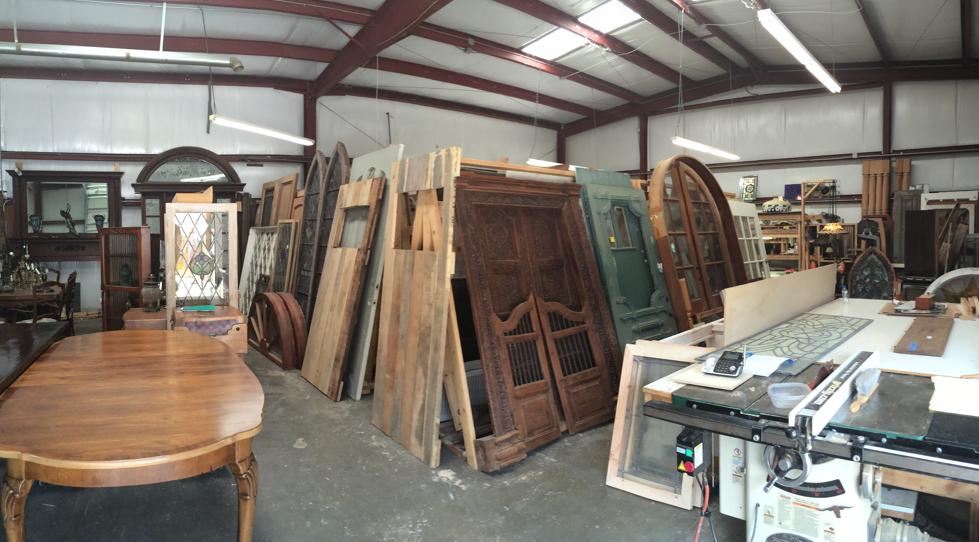 I did come away with a vintage pre-Disney Florida tablecloth for the breakfast nook in the summer time. 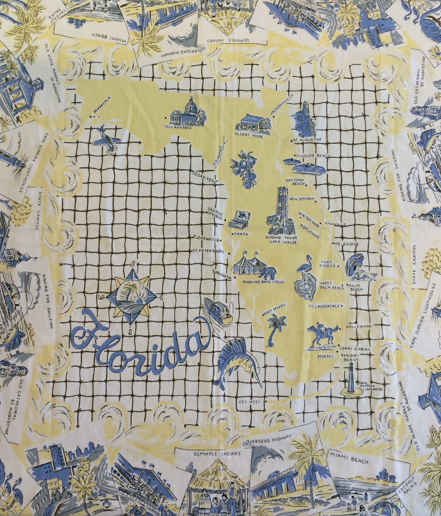 We got back into downtown and set out on foot exploring. We finally found the little courtyard with the 2 creepy statues that we spotted a few days ago down a tiny alley and couldn’t find again. It was like finding a 20 dollar bill in the dryer unexpectedly. 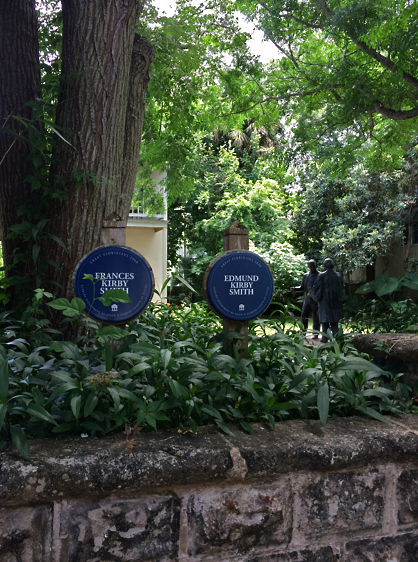 One last stop at Denoel’s for a box of croissants to take home and freeze, and I also tasted my first real French macaron. I went with a little bitty vanilla one, Ben went with chocolate. I get why people make a big deal about them now. 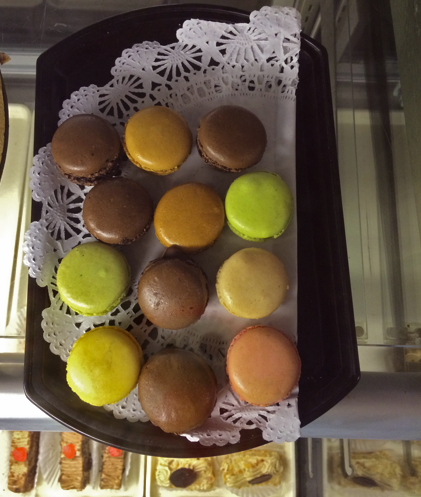 Afterward we walked down to the sea wall to see the boats in the harbor. We’ve never walked the Bridge of Lions from downtown to Anastasia Island, so we did just that. The views of the harbor and the Old City were amazing. Apparently this ship is used in the new John Malkovich pirate TV show. Do you know what I’m talking about? 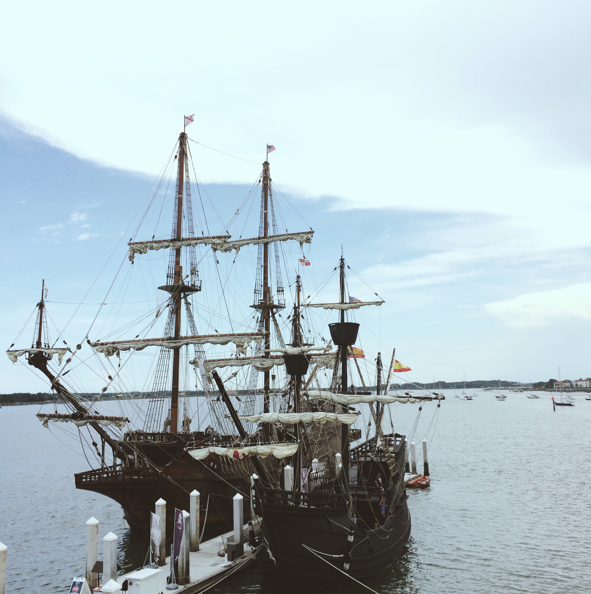 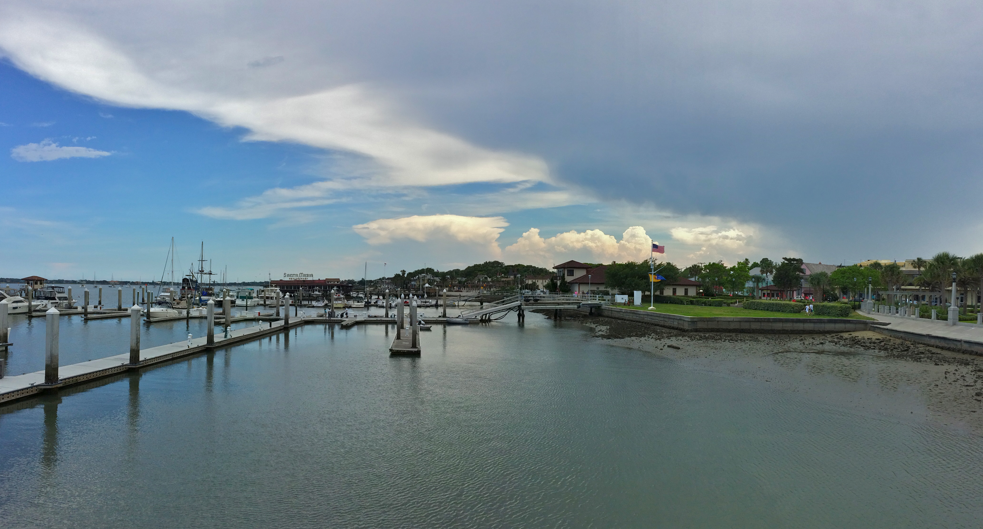 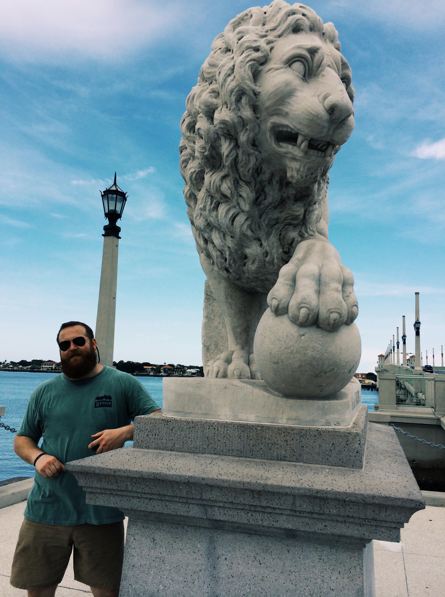 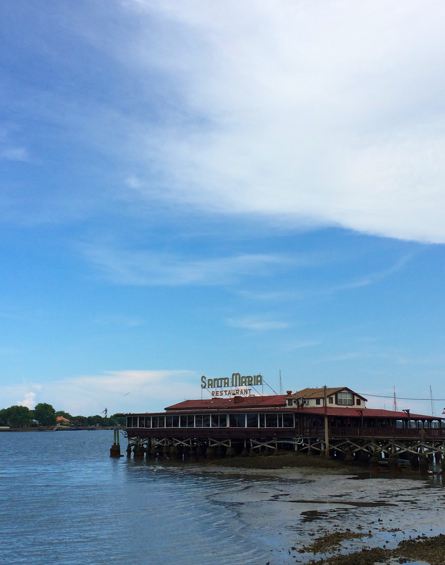 There were 3 more stops I had to make before we leave tomorrow—the Mission de Nombre de Dios that sits in a garden right by the inlet where Ponce de Leon first landed in America in 1513. It was claimed by Pedro Menéndez de Avilés for Spain and the Catholic church in 1565. It’s an ancient, tiny, little micro-chapel, covered in ivy, with an altar, a few benches, and votives burning inside. It’s peaceful. You can feel God as close as your skin in a place like this. 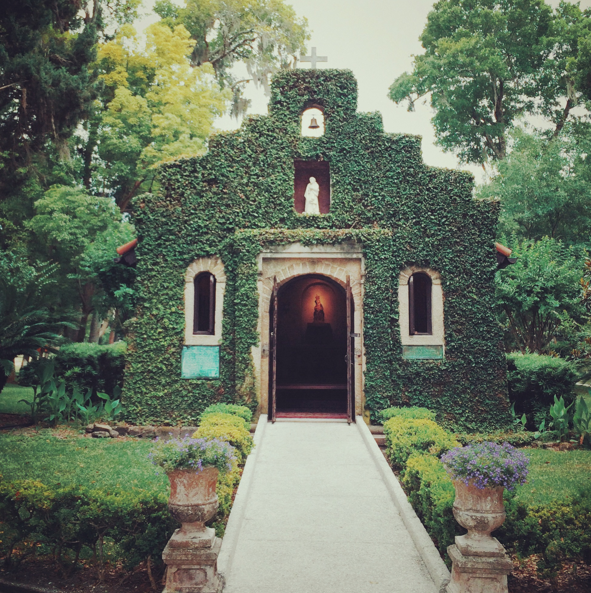 When we left, we went over to the island near the St. Augustine lighthouse to the plant nursery there on a mission to determine the beautiful shrubs that grow EVERYWHERE in this city and remind me of a very big, sturdy rosemary. It’s called Japanese yew, in case you wondered. 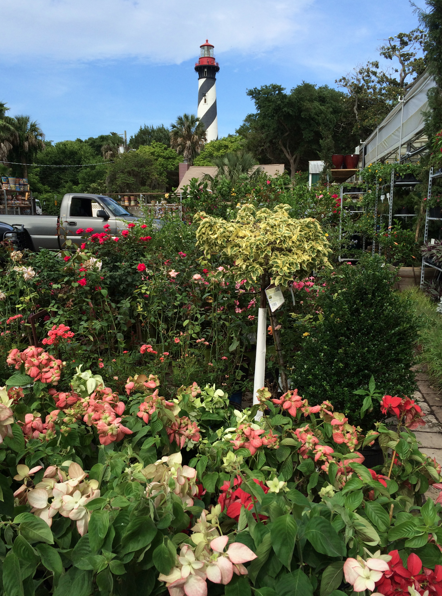 I also ran to the shop that sells Spanish pottery on St. George Street called Market to Market, and got 2 big pots for our front stoop since a couple of my terra cotta ones have cracked pretty badly. I forgot to take a photo, but I got this pattern and this pattern. They’re so colorful and lovely!
Then we were hot and tired so we went back to the hotel for a swim in the pool, then showers before dinner. 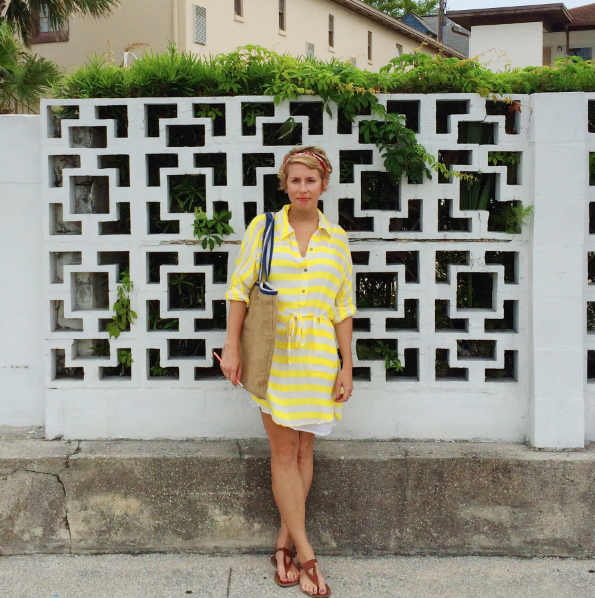 We weren’t quite hungry yet, so I took my sketch pad over to O.C. White’s to do a little portrait of our favorite tavern. 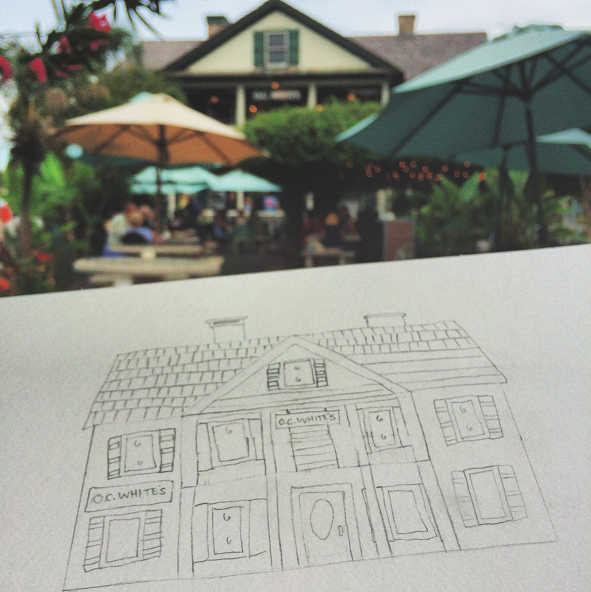 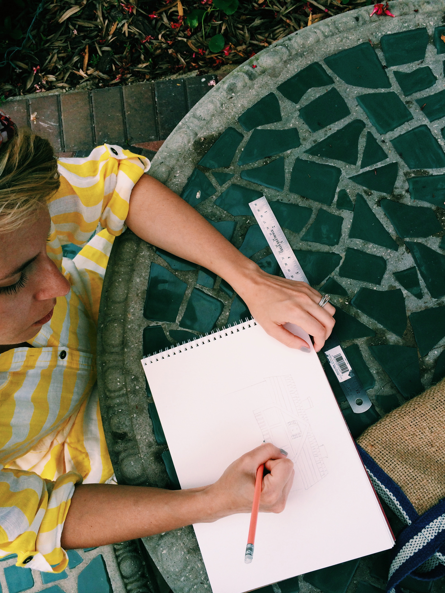 When I finished, we went walking and found a bluegrass concert happening on the lawn of the town square. You can’t make this stuff up.

Ben made friends with a pup named Sonya. 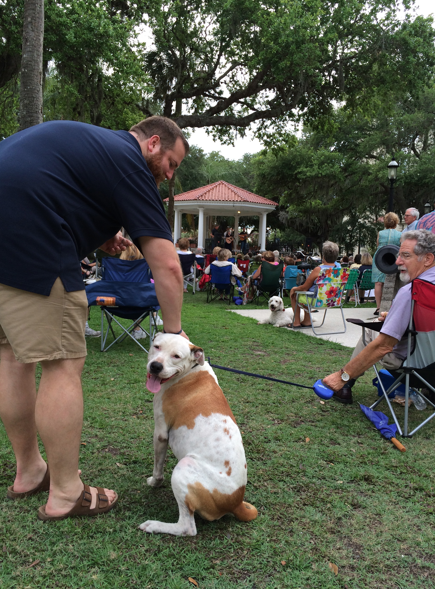 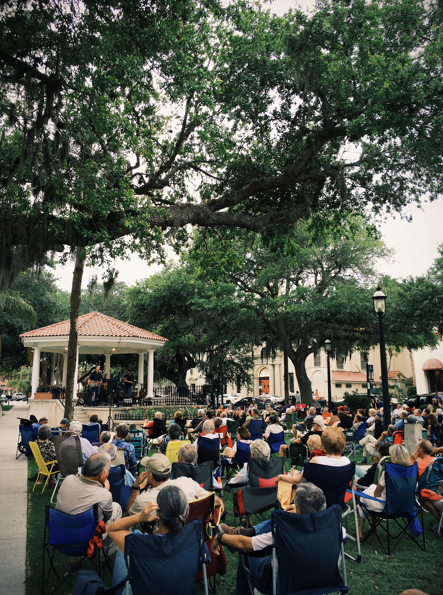 Then we met a man from Arkansas who looked like Ernest Hemingway. 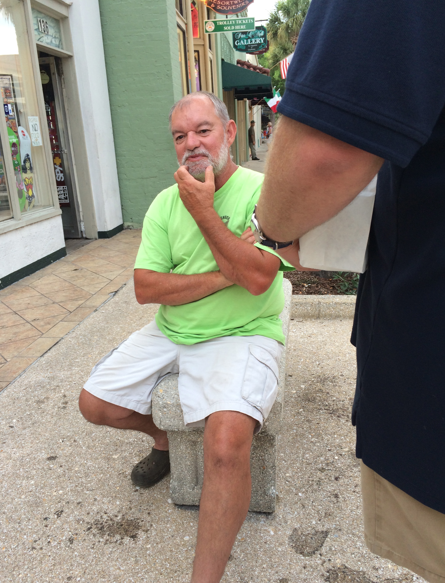 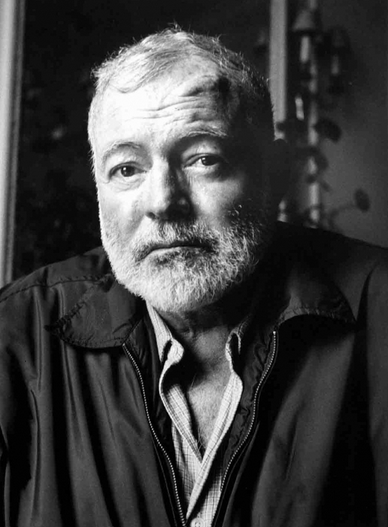 Am I right? Ben spotted him. I’ll give credit where it’s due.
And then dinner at Pizzalley’s! Our favorite Italian spot in SA, for a roasted vegetable and Canadian bacon pizza. Mmmmm… 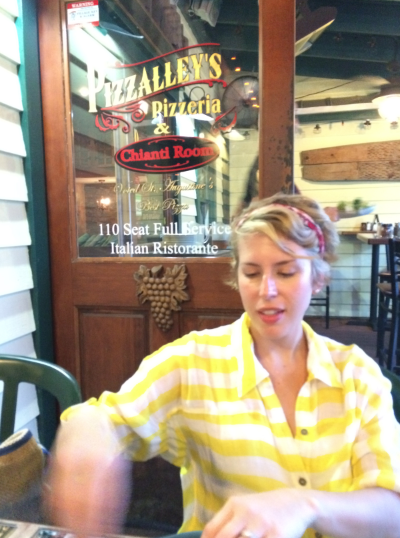 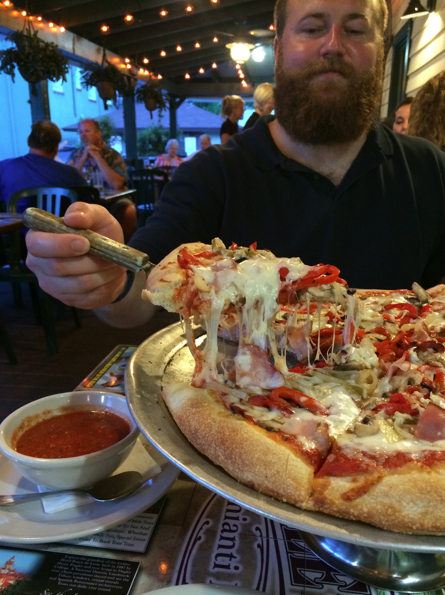 Then to feel better about ourselves for gorging, we went back to the inn to change clothes and go for a long, long, long walk all through the alleys and cobblestone streets. It made me feel less like a blob, more like a person. 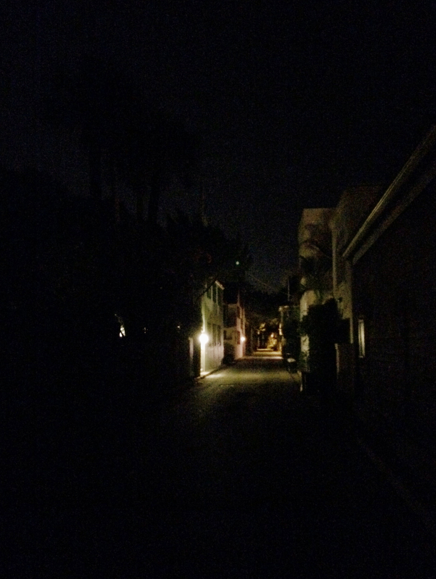 We stumbled upon the oldest house in America. There wasn’t another soul stirring on the street, and we dared each other to look in the windows. I got my courage up, peeked inside, then ran as fast as I could. I was terrified. There’s been a lot of water under that bridge, you know? Spooky. So spooky. 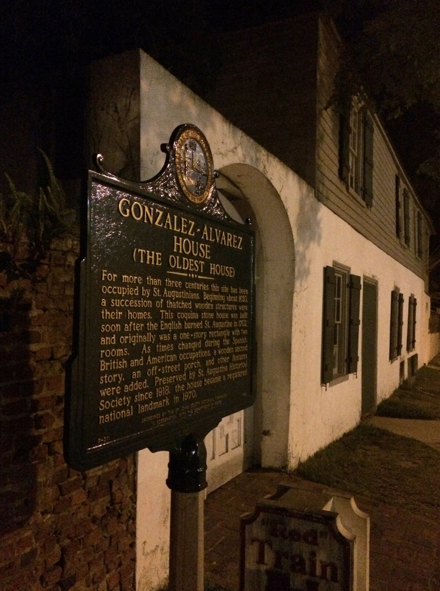 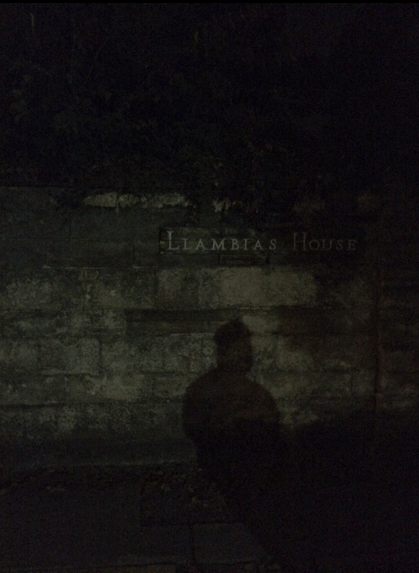 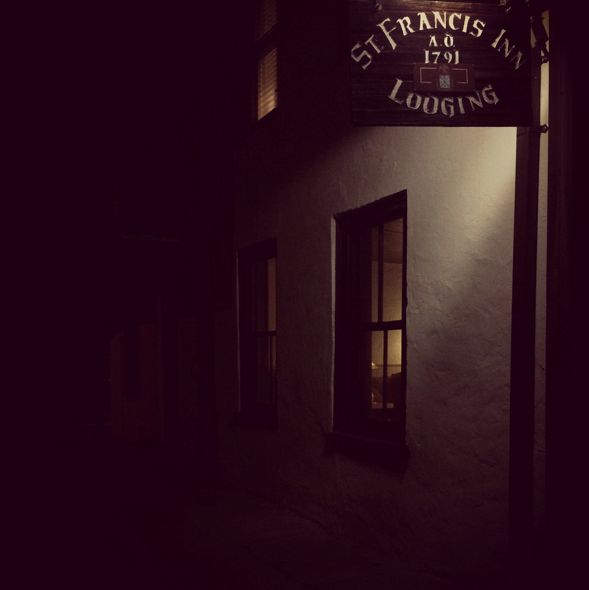 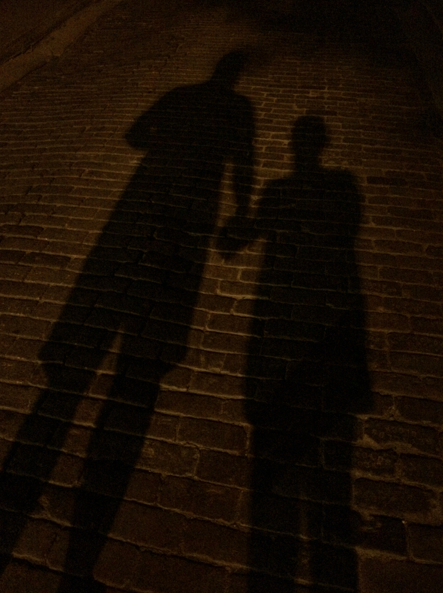