Ben’s younger brother, Tom, owns Napier Trucking up in Baldwyn (near Tupelo), and the only time we ever get to see him is on our trips to Ben’s parents or if we are lucky enough to be on one of his routes to one place or another. Today he called us an hour away from Laurel and told Ben to make a lunch plan. We had lunch at Mi Casita that lasted until 2:00 because there was so much catching up to do (even though they talk on the phone every day like girls). 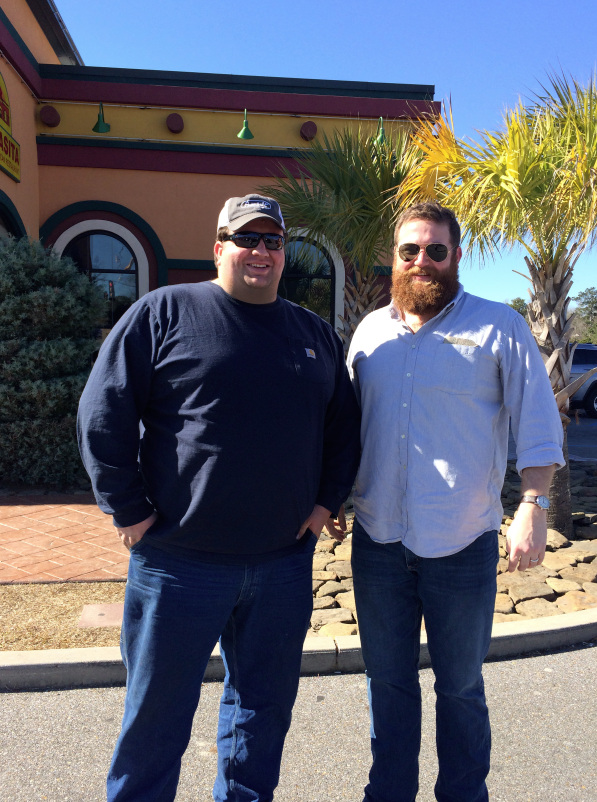 Maybe it’s because I come from a small family, with my only sibling being the opposite gender and much older than me, but I am endlessly fascinated by the way there can be 4 brothers, separated by just a few years, all cut from the same genetic cloth, all completely opposite in so many ways, and all exactly the same in others.
For instance:
Sam is a math professor, analytical, into craft beers and debating things. He really enjoys learning more about math and is a great cook. He married a red head.
Ben is fearless in all social situations. He likes making things, fixing things. He’s interested in creative things—books and music. He’s incredibly even-tempered and slow to anger. He married a blonde.
Tom is the hot-tempered unbearded Napier brother, the early riser who gets up with the sun. He hated school and always wanted to see the world from behind the wheel of Peterbilt. He married a brunette.
Jesse is crazy polite, the introspective brother who gets carried away with questions and thoughts on the big things—politics and sociological topics. He’s not naturally social, but you’d never guess it. Who knows who he will marry?
They all love cars, Duke basketball, and believe their father is the smartest, toughest, wisest, coolest man on earth. And I’m so glad they’re my family.
Newer Post Older Post
Back to Journal