Yesterday was Clark’s birthday but since he had to work his party was tonight at mama’s. When we were growing up, for the grandkids’ and sons’ birthday present, Mammaw would cook us anything our hearts desired. For all 3 of us, we always requested her spaghetti and meatballs. Now mama’s taken over that tradition in cooking us whatever we want on our birthday and Clark chose her gumbo with fresh french bread on the side. 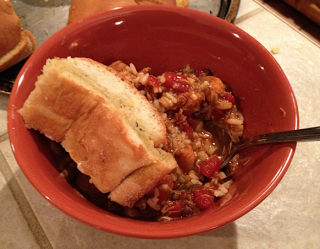 Like everything else she cooks, it’s amazing. She and I are both anti-spicy so it’s not hot, but it’s flavorful and the Tabasco sits beside the salt and pepper should anyone like it hotter. I’d love to try the recipe but there’s no way I can make roux like her so I think I’ll let her stake claim and I’ll just get by with her other famous dishes like this one and this one.

Also, we adopted a beautiful but malnourished great pyrenees today! He’s completely adorable and looks much like a polar bear, but under all that fur he’s just skin and bones.  We fed him, took him to the vet and gave him a brushing but he’ll need a good bath first thing on Monday to get rid of all the ticks and fleas. Eesh. The vet told us he’s 50 pounds underweight for what he estimates his age to be (1.5 years). So far he and Chevy are pals, and hopefully it’ll stay that way. If not, we’ll be looking for a home for the sweet feller. I’ll introduce him next week when he’s camera ready.