Ole boy Baker spent yesterday and last night at the animal hospital. He had a surgery that made him half the man he was Monday. We brought him home this morning and he spent the day being pitiful, lying at the back door listening to the Midnight in Paris soundtrack while we fed him smoked ham laced with Tylenol and gave him unlimited ice cubes (his favorite). On the upside, he also got groomed before they took his manhood and he’s looking tip top. 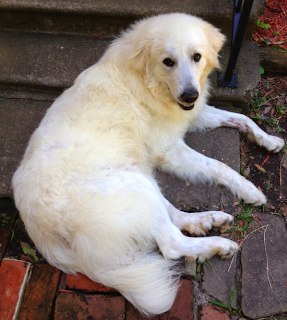 The little kids at church were heartbroken that Chevy came without his brother to church tonight, and they asked me where Baker was. I said, “he’s at home resting because he had surgery.”
They said, “what kind of surgery? What’s wrong with him?”
I said, “he got fixed.”
“What does that mean?”
“He got neutered.”
“What does that mean?”
“He’s not a boy anymore. Or a girl.”
“…………Oh.”
Sorry, Chevy. You’re next.
Newer Post Older Post
Back to Journal