Every day on our walks down 6th Avenue, Chevy stops and sits in front of the Palmers’ house hoping to see his buddy Hatfield. The week we got him back in November, we met the aging yellow lab on one of our first walks around the neighborhood. Chevy was shy and afraid of literally everything, including Hatfield, but he was such a sweet old pup, he was gentle with Chevy and before long Chevy would bound toward their house hoping to see him. He was his first dog buddy when we brought him home to Laurel.

We got the sad news that 12 year-old Hatfield’s health was quickly declining on Saturday. He’s been having trouble walking for a long while now and he’s stopped eating in the last few days and so tomorrow the Palmers are taking him to the vet to be put to sleep. I never understood people being so attached to dogs until we brought home Chevy, and now I can’t imagine how tough it must be to make the decision to let him go.

Tonight on our walk, we found Laura out taking him on his last bedtime walk to the end of the block. We had Baker and Chevy and Jim and Mal were walking Sugar and Moe, and when they saw Hatfield lying down at the corner of 6th Avenue and 8th Street, the dogs all bounded over to him to play. Hatfield’s tail was wagging like a young pup, while Baker and Chevy tried their best to make him get up and play with them. Baker kept petting his back while Chevy lay down beside him whimpering a little, upset that Hatfield couldn’t stand up and play. I wonder if dogs know when another is sick? I swear I think they might.

Laura was obviously feeling emotional, and I feel bad that we were intruding on their last bedtime routine but she insisted it was the happiest the dog had been in years, seeing other dogs all around him. She asked Ben to say a little prayer for Hatfield, which he obliged, then in an effort to get him to walk back to his house we walked all the dogs with him. He eventually got the motivation to go, and with a little help from Ben he got up the stairs to the front door, where he laid down to rest a minute. Chevy lay beside him for a few minutes in solidarity. He hopped up and walked off the minute he saw a camera, of course. 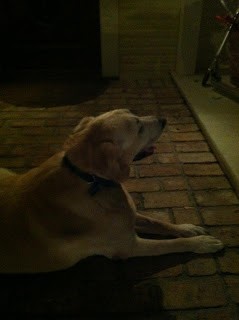 We gave him a pat on the head and gave Laura a hug. We all felt heavy hearted saying goodbye to Hatfield and walking home. I’m so glad we could all give him a scratch behind the ears and something out of the ordinary for his last bedtime walk. What a sweet pup.
Newer Post Older Post
Back to Journal