We met some of the nicest people in the world today. Let’s review from the beginning: 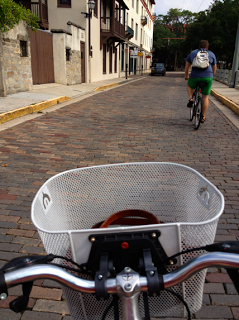 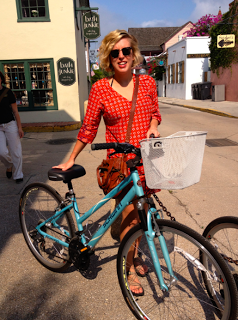 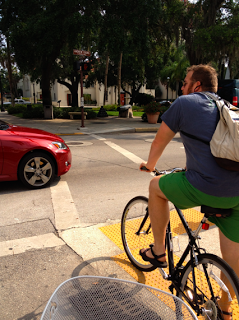 First we rode our bikes to a creperie on St. George street for breakfast.

Then we met nice person #1, the lady at Second Read Books. I’ve loved this shop since our first visit when I was 11, and I love it even more now. The owner was so excited that we were there from Mississippi, asking us questions about where we live, wanting to see the pictures of our new house, recommending great books for us. She and I even have the same favorite author—Elizabeth Berg. Isn’t that something? We bought 5 new (used) books. As we were leaving she told us, “Be careful if you get in the ocean at the beach! The riptides are tricky today!” 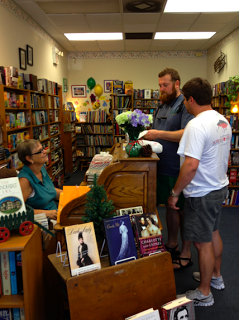 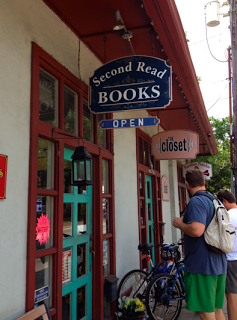 Then we stopped by a historical map and ephemera shop on Aviles Street out of curiosity, knowing we couldn’t afford anything. But I asked Mr. Bouvier, the sweet owner and nice person #2, if he had any reproduction maps. And he did. Tons of them! He went in his back room and pulled out this huge portfolio of them just for us. For $35 total, he gave us gorgeous antique (reproduction) maps of Florida, St. Augustine, Boston, New York City, and a few others I can’t remember at the moment. Jim bought some super cool ones of New Orleans and Savannah for Mallorie, because we’re all missing her going into these cool shops. 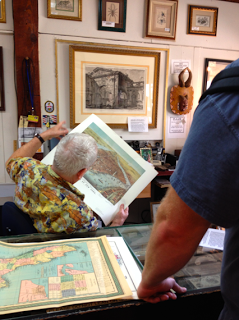 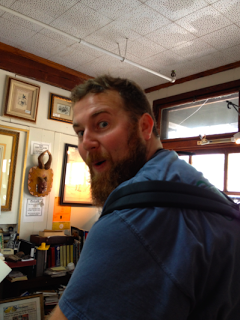 Then we stopped by Memorial Presbyterian, the church Henry Flagler built to entomb his daughter who died in childbirth. The day after she died, he ordered that construction begin on this cathedral and be completed in less than a year. It was finished in 355 days and he had his daughter’s temporary grave exhumed and moved her here. 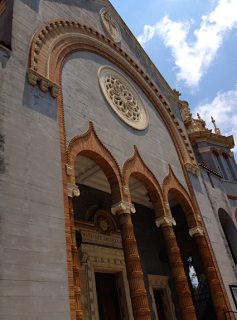 Isn’t it astounding? The rotunda in the center of the cathedral is 100 feet high. 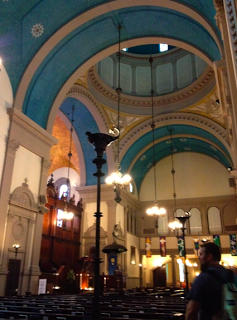 He is also entombed here, in a marble mausoleum along with his wife, daughter and granddaughter. 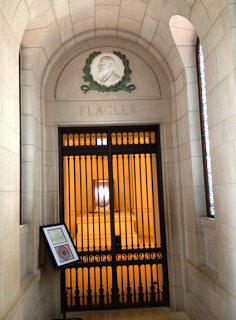 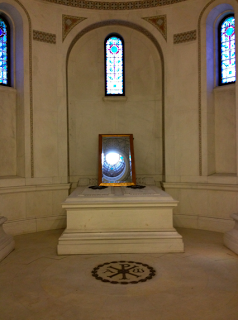 Then we were hungry again and had fish and chips (the guys) and a ham sandwich (me) at the Prince of Wales, a restaurant that only serves English food. Except real English food is horrible and this food is delicious. 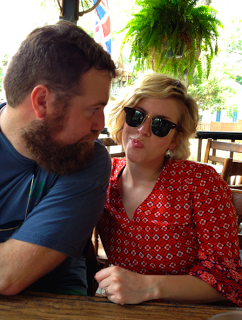 A girl was playing guitar and singing songs by Ani DiFranco and Norah Jones who for the world reminded us of Christy Bush. 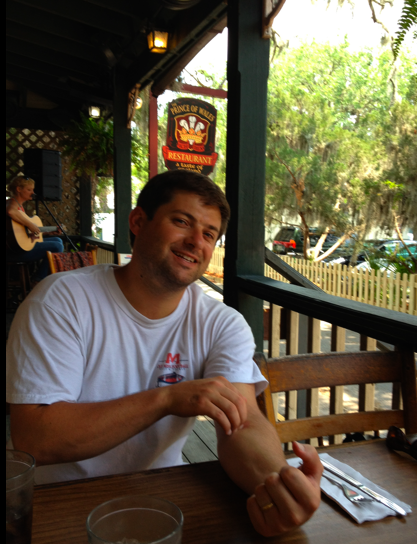 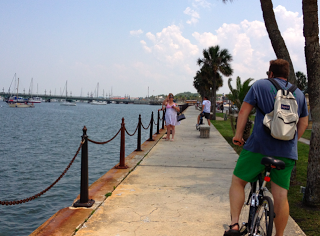 And then we went to the beach to lie in the sun and swim. The water was just as warm as the gulf, which I found odd. 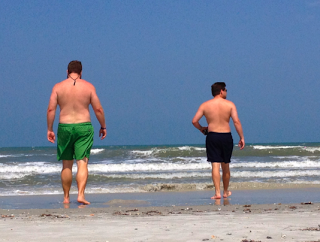 Here, we met nice person #3, a man running with his dog on a leash who came to our beach blanket and asked if that was our black Tahoe behind us. He told us a beach patrol deputy was riding along giving people tickets if they weren’t parked behind the orange cones at the edge of the dunes. We were just barely past them and he didn’t want us to get a ticket. So Ben walks over to the truck and the deputy pulls up. He is nice person #4, who tells him, “No problem, man! Just back your truck up a couple feet and you’re good!” 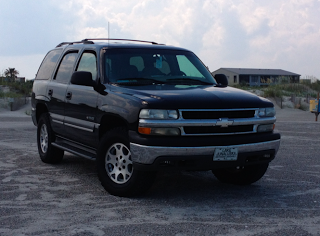 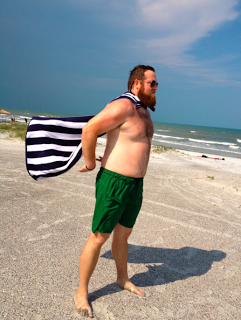 Then we went back to the motel to take showers before our last night out in St. Augustine. There was a bluegrass band playing in the town square and a crowd was gathering. It’s a strange thing to hear bluegrass music normally reserved for the Smoky Mountains mingling with centuries old Spanish influenced architecture. It was a very cheerful sound, and people were having the best time listening, drinking wine and eating picnic dinners they brought. 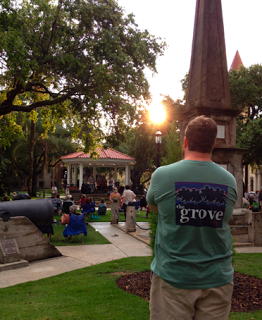 We had Italian at Pizzalley’s Chianti Room, Ben’s favorite spot to eat in St. Augustine. 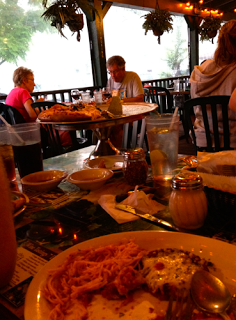 Then we drove to the south end of the city to visit Jason and Laura, our friends who own 2 ice cream shops in SA. Jason had gone home to take care of their kids when we arrived at 9:30, but Laura was there and treading water to keep up with all the customers that kept coming in. We offered to help at one point, but she declined because she is nice person #5. 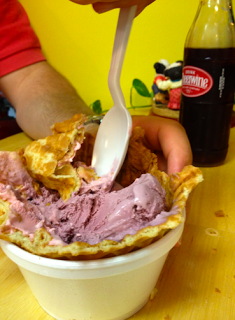 By closing time at 10 pm, there was no where to sit inside. I guess that’s why they’ve won ‘best ice cream shop’ in the St. Augustine awards every year since they’ve opened. That, and the fact that they make a lot of their 200-something flavors in-house. I don’t care for ice cream, but this is some of the best stuff I’ve ever tasted. Ben got carrot cake ice cream and I took a bite. It was very fluffy and… well, creamy and tasted exactly like a mouthful of actual cake. 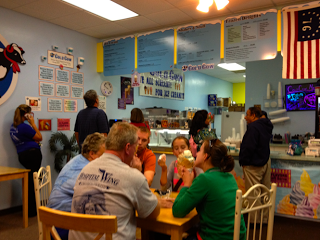 Then I was tired with the beginnings of a sinus infection and ready for bed, but Ben wanted to take my Canon camera out to the Bridge of Lions to try and get just a couple photos of the city at night. He LOVES taking pictures of cities at night when it’s easy to stand in the middle of the street and use walls and statues for tripods. 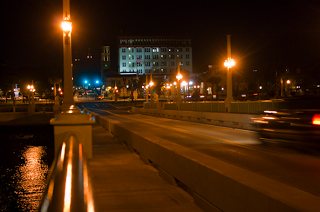 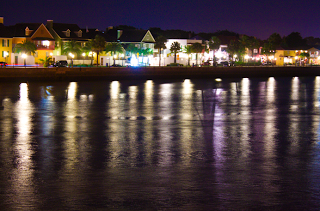 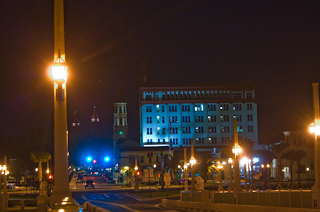 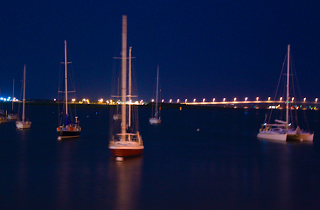 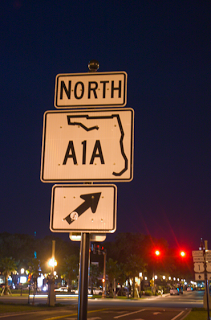 I’m sad to be leaving my favorite city on earth, but I know we’ll be back next year or the next. See you later, St. Augustine.
Newer Post Older Post
Back to Journal