A month or so ago, we were in Lowe’s and I spotted these two beat up boxes on the bottom shelf that contained THE greatest wall sconce lamps I’ve ever seen in my life. They looked antique, oil-rubbed bronze with a white linen shade. Best of all, they were on sale for $34.99 so I snatched up 2 of them with plans of putting them on either side of our bed, thus eliminating the nightstand lamps and making more room for book piles. I ran up to the checkout counter like a maniac, so excited and expecting them to be excited with me.

They tried scanning the boxes, and they rang up ‘not for sale.’ Apparently there had been some recall on that particular style and they couldn’t sell them. I asked to speak to a manager and told him I’d pay whatever it took to take them home with me. He wouldn’t have it. Wouldn’t consider it. Said those lamps would be going in the back storage room indefinitely, and he was sorry. I literally tried to bribe him. Nope, not selling them. And then I pouted for 2 hours and began scouring the internet for something similar. What I found were cheap, ugly wall sconces without cord covers that were outrageously expensive (we’re talking around $200 a piece for a PLUG IN wall lamp). I found some that were all right from Pottery Barn, but still paled in comparison to the ones at Lowes on the sale rack. Ben told me not to rush into it, to be patient and one day we’d find the perfect lamps. And I pouted for a month.

Tonight we went to Lowes to pick up a gallon of Dover White, and I idly thought about checking the lighting aisle just in case they were inexplicably back on the shelves, as I’ve been doing every visit since that night. And by some miracle… There they were. Back on the shelves for the same price. 2 of them, on the very tip top shelf this time.

I walked out of there with my dream sconce lamps and can’t get over it. I’m tickled to death. Isn’t that the lamest thing you ever heard? Well, they’re real pretty so I don’t care if it is lame. It made our bedroom into the very kind of cozy, simple, light filled room I’ve been hoping it would be. It’s finally living up to its potential. Way to go, Lowes. 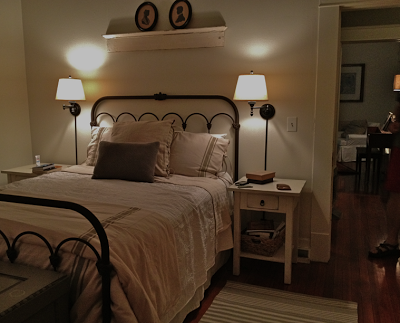 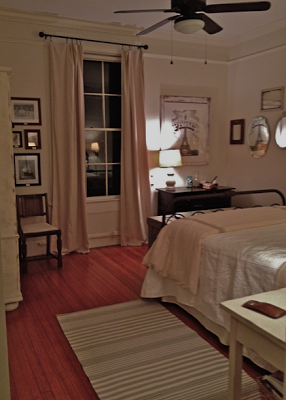 Now I hope they weren’t recalled for a reason. Maybe the house won’t go up in flames tonight.