Two mama posts in a row, I know, but since today is the actual holiday of mamas it begs to be mentioned, right? A few things—after church we ran out to my parents’ house for lunch where I got to see Mammaw for a quick minute before we went north to see Ben’s family. She was awesome, per usual, and I gave my mama a quick squeeze before we left: 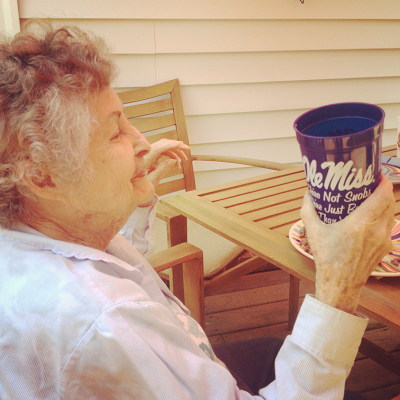 Then in Newton, I spent the afternoon coloring Jookie’s hair and painting her nails. I love to do girly things with her when I get to visit since she’s lived a girless existence since marrying the Rev in the 1970s. Especially when it’s Mother’s Day! While we did that, Ben sorted through old family photos. From one stack I found this photo of Tom, The Rev, and Ben that stopped me: 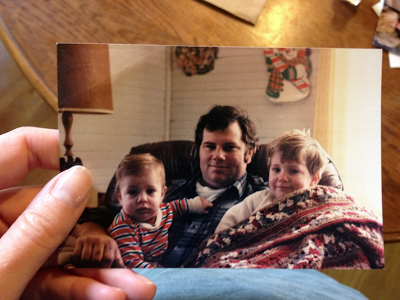 Because you see that little face on the right? That’s what the face of my someday little boy will look like. I immediately could imagine this. It was something I had never once in my life considered before. He would be brave and kind and loving and tough. He would get runny noses and skinned knees. And I would love him very very much. My heart seized up and my throat felt tight at this very real thought.

I’ve never had a thought like that before. I’ve certainly never said it out loud if I did. No, I am not at all ready to have a baby. Yes, I would like to someday. If only because they’ll be 50% Ben Napier. That’s enough for me.

Well. Can’t believe I just told you that.

After spending the day in Newton, we all caravaned and hour away to see Ben’s grandparents. We stayed there a few hours, talking heatedly with Grandaddy about the election. He’s a seasoned politician, the former sherriff and a campaign manager since the 1970s, so we value his advice VERY much. He told me again and again, “if anyone ever asks if your husband’s grandaddy is Dewitt Napier, you tell them I am YOUR grandaddy just as much.” And this means more to me than he might know. I miss my grandfathers so much and would love to have a 3 hour conversation with them about anything at all. I’m thankful for him. 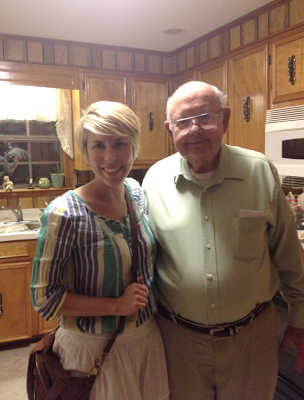 My friend Lisa commented on the last blog and asked if I might share some of the things my mama did that fostered our good relationship. She’s compiling advice for her own mothering, which I think is a fantastic idea. I’ll tell y’all about that here if you’d like to know. I like to make lists, so I think this would be the best way to explain.

1. She was with me so much growing up. We spent a lot of quality time together doing creative things. I knew that she was a realtor as a child, but her work schedule was very flexible. She took me to school and picked me up every day. We had the Childcraft encylopedias and she and I would pick projects from it daily to make—a lion mask from a paper plate, or a robot from paper towel tubes. We painted and did macrame, we drew Disney characters and people in church on the back of the bulletin. We did everything together when I was young. She was my best friend. We hugged a lot. We said “I love you” even more.

2. We butted heads when I was in high school over a lot, but she gave me the freedom to make my own decisions on so many others. She was the cheerleader captain in high school and encouraged me to try cheerleading in junior high school. I tried it. I hated it. She said “don’t do it if you don’t want to” and she truly meant it. She never forced me to keep doing it, but she always made sure we tried everything once. She understood wholly that some things that she might have loved just weren’t for me, and encouraged me in the things I DID love, like art and music. She didn’t like the music I liked sometimes, but she was so proud to see me playing guitar and piano at coffee shops and talent shows. She never missed a show.

3. She was never easy on me. She expected the best from me and I knew I was capable because of her encouragement. She expected the house to be clean, the grades to be A’s, the boyfriends to be smart and handsome, and the college plan to be in place in high school. She was never the kind of mother to give in to my wants, and that’s why we butted heads sometimes when I was a teenager. She was very tough, in other words. Now, I see that as her greatest attribute as a mother. Pushovers, I think, make kids who grow up feeling entitled. We definitely never felt that way. At the time she probably felt like it was a losing battle, but I hope she sees now that it did pay off.

4. She encouraged me to be independent, to think for myself, to be unconcerned with the opinions of my peers. If I had a hard time finding girl friends, she told me it was because I was different from them and that it was a very good thing. She was proud that I marched to my own drum. Remember this post? I learned that from her. This may be my favorite thing about her.

5. Daddy was always right beside her in all of this, they were a united front on toughness and expectations and so I should certainly say that by staying with and loving our daddy our whole lives put a very specific example in front of me. I knew that I would need to find a hard working man to love, who would be the God-fearing leader of my own family one day. I learned from them that marriage is forever, it is not dating, and it is not infatuation.

There are a lot of other things I could write about mama, but I think these are the big ones. I hope that’s helpful for you, Lisa. I hope this doesn’t embarrass you, mama. 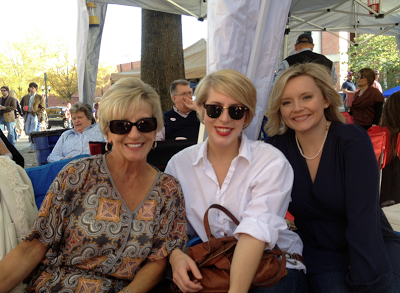 Mama, me and Mallorie in the Grove at Ole Miss on gameday