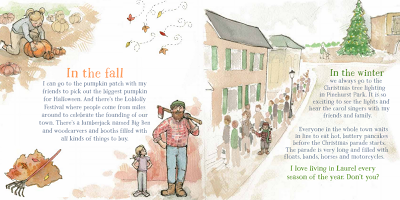 See the picture on the right? We got to Pancake Day earlier than the rest of the crowd, but this is the scene in real life before the line starts wrapping the block: 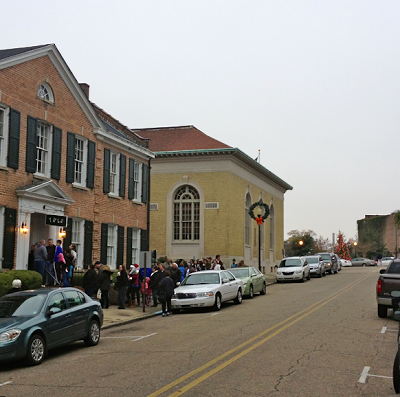 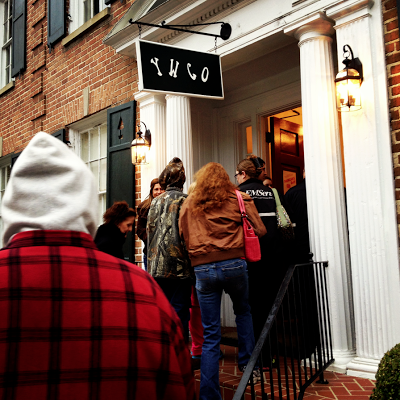 And everyone you’ve ever known in your whole life is inside, having all-you-can-eat pancakes, sausage and coffee—gossiping, hugging, laughing, hollering. It’s like getting to be a child all over again every year—it never feels old, it always feels like Christmas should feel. Like home, I guess. 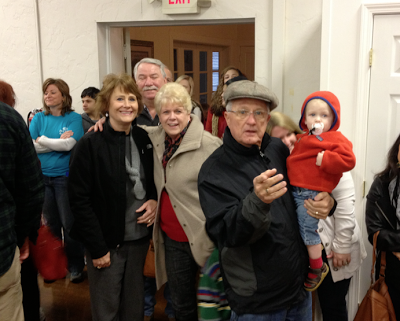 My parents’ best friends forever and ever were there, of course. 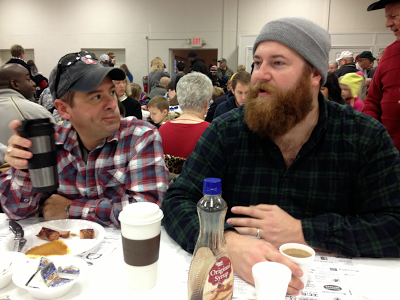 Our friend Trent, who owns a major industry in Mississippi and whose father is a world famous anvil shooter. 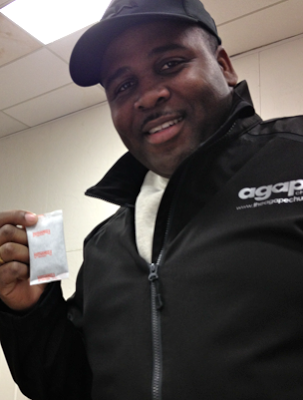 Our buddy Will, who saved the day and gave me some of his extra hand warmers for the parade. 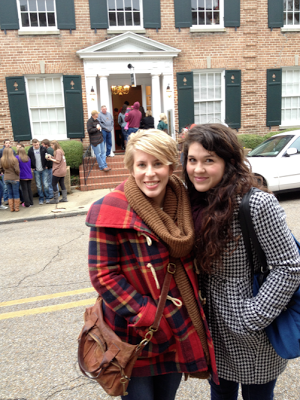 Brooke, my friend and neighbor who used to work with me at Lucky Luxe.

We had to eat with the early shift since we had the great pleasure of driving one of our awesome neighbor girls, Katie, in the parade. She’s Jones County’s distinguished young woman this year, and her daddy is our state auditor. They’re some of Ben’s kinfolks on his mama’s side way down the line. Pickerings are one of those Mississippi families to whom everyone is related one way or another. 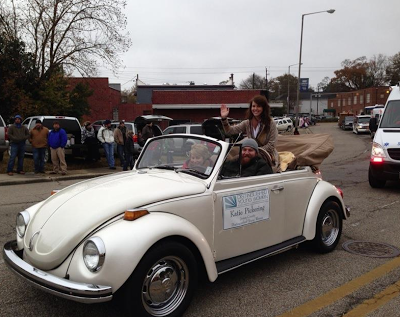 She was such a champ! It never got warmer than 35 degrees and she smiled and waved and chatted the entire parade route. Superwoman. 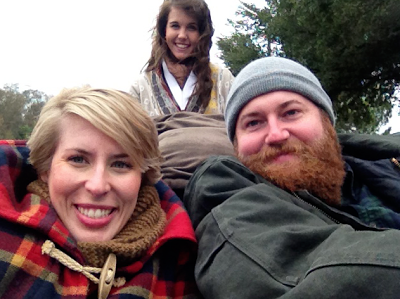 In the summer they say, “It’s not the heat—it’s the humidity” that’ll kill you in Mississippi. Well, the humidity doesn’t disappear in the winter. It just makes it even colder. We were frozen solid. 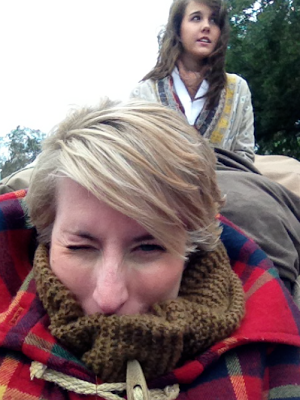 My family was perched warm and cozy in the Lucky Luxe loft which overlooks the parade route: 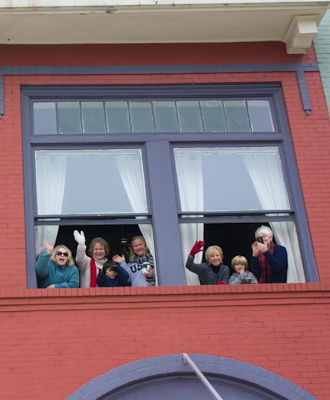 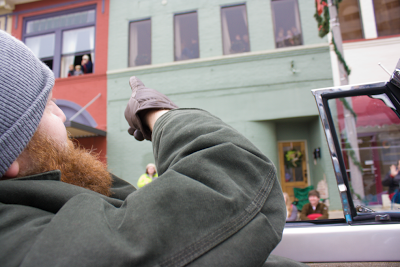 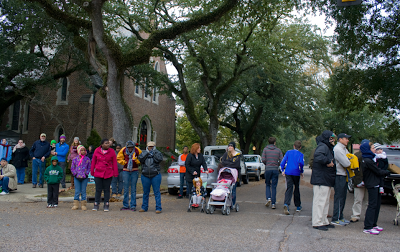 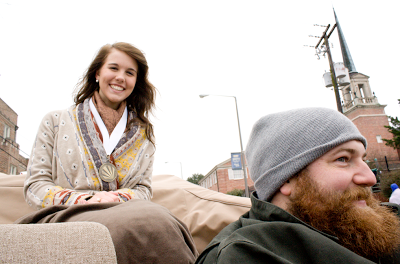 Katie’s mama (wearing brown), walked into the street and traffic stopped so she could snap a picture of her baby. Adorable. Then she ran back to the sidewalk and took some more. 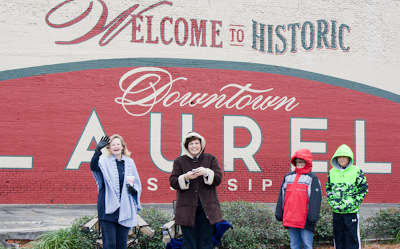 As fun as today was, it didn’t feel right without Jim and Mallorie there. Baby Lucy has been in the hospital with a bad respiratory infection and she missed her first Pancake Day. Y’all say a little prayer for her? We went to see her after the parade, then came home for a nap beside the fire. My toes thawed out after about an hour. We went to the church staff Christmas party later, and I was exhausted but happy to finally see the lights at home at the end of the night. 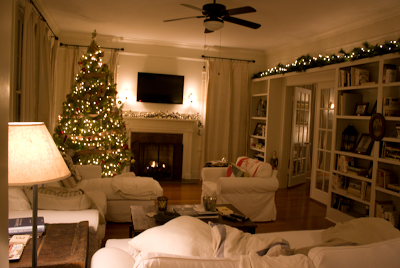 We walked the dogs around the block where I drooled over our neighbor Randy’s gorgeous craftsman cottage. If anyone’s home should be featured in a magazine, it’s his. In my opinion, there is no prettier house in our neighborhood. He’s the sought after florist in town, so it’s no wonder his house looks like this. It’s like something from a dream. 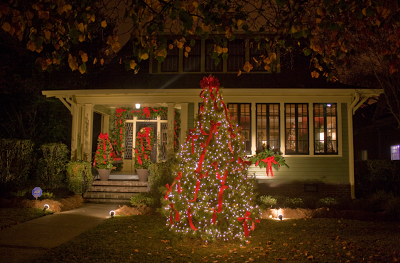 We bumped into him on the sidewalk, walking home from the black tie gala at the art museum. He invited us in and we ended up staying the longest time, talking about this and that. It’s very good to have such gracious people living all around. 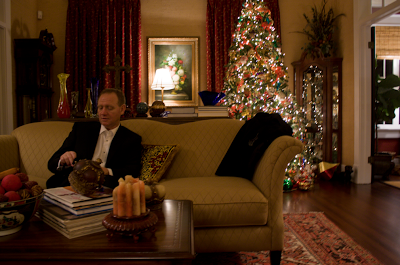 And he totally reminds me of James Bond in this photo. He also gave me advice on preserving the piece of the Rockefeller Christmas tree we brought back from New York. I want to put it in a shadowbox we can display every Christmas, and he told me to let it soak in antifreeze with a smidge of green food coloring for about a week. Have you ever heard of such as that?
I’m going to go crawl to bed now. See y’all tomorrow, friends.