Today was the finish line. We’ve been waiting for it since November 14 when Clark and Amanda got the call that their baby boy would be born in a few hours, that they could come to the hospital and wait for him. They were there when he was born, and they were the first to hold him. They gave him his first bottle. They changed his first diaper. They brought him home to his (borrowed from family friends at the last minute) crib. They gave him his first bath, his first kisses. But they couldn’t call him their son. For months, even after so much paperwork and legal counsel, there have been sleepless nights, the possibility of the birth parents changing their minds. Momentary panic after a phone call from the lawyer that turned to relief and comfort that could only come from the hand of God by night.

2014 has been a very hard year, regardless of what I write here. This is a place that I would sometimes force myself to write something positive even when it felt like darkness was surrounding us. I remember that this blog was a dark day. I couldn’t think of anything else that was good that day. But there was still something. January was a tremendously hard month for my business, and by February business was booming again. In February, after being well for 8 amazing months, I suffered a major attack that landed me on the operating table for the first time in my life. In March, we all lost our beloved Beau and I was scheduled for a second surgery. They found and removed what was making me sick, and I’ve been feeling good since. Through all of that, my parents, my brother and Amanda were stuck in a no man’s land of overwhelming joy that a baby boy brought into their homes, tempered by the sorrows of an uncertain future without him. Some days we all felt sick. On my hospital bed 2 weeks ago, my mantra was, “If we can just get to April 11. It could all be behind us.”


Walker’s birth mother signed the forms that made him theirs the day he was born. She was brave and selfless. Her sacrifice was our family’s indescribable joy. She’s a blessing in ways she can’t possibly fathom. The father refused to consent. He informed the lawyers that he would be appearing at the adoption finalization to contest. We were sick with worry, but did all we could to give it to God, to feel him moving around it all. Around us.

This morning, the birth father, a stranger we’ve never seen, walked into the courtroom in downtown Laurel.

The judge asked him, “Do you contest the adoption of the child?”


The lawyers were stunned. They hadn’t prepared for this. He turned over all of his rights at the last minute—without a fight. Without contest. Before Ben and I could even make the 1 block to the courthouse, I got a text from my brother. It said “It’s over. We won.”


One of the many advantages of living in a small town your whole life includes knowing everyone else who’s been here your whole life. There were 7 people in that courtroom besides our family and the birth father. Judge McKenzie, whom my parents have known for a million years. Mr. Smith, the bayliff who was a dear friend of my grandfather’s who pets Chevy and Baker in the mornings on our runs past the courthouse. Alana, the court reporter who almost shares my exact birthday, who grew up with me, who spent the night at my house and sang songs from The Bodyguard in the backyard with me. Mr. Bob, our family lawyer who is better known as one of my parents’ closest friends, whom you can find on their back deck on Ole Miss game days in the fall. Mrs. Melinda—his wife, my mama’s tennis partner and international travel buddy. Mrs. Concetta, the clerk who was mama’s best friend in high school—a fellow former NEJ Tiger cheerleader. Mr. Moss, the bulky bayliff guarding the door (who reminds me of an old sea captain)—my parents’ next door neighbor who said he normally doesn’t let folks bring in food, drinks or weapons but he’d let it slide with me and Ben (with a wink and a chuckle). We were surrounded by familiar faces of friendship and love. We felt God moving there, overwhelmingly. The birth father signed his papers and left immediately, without event or hesitation.

At the end of the hearing, Judge McKenzie said, “Congratulations to this family on your new baby boy. This case is closed.” He gave us a thumbs up from the podium with a huge grin on his face. We all clapped and cheered, and the whole cast of Southern characters you could find in a Jan Karon novel met on the floor of the courtroom and hugged. 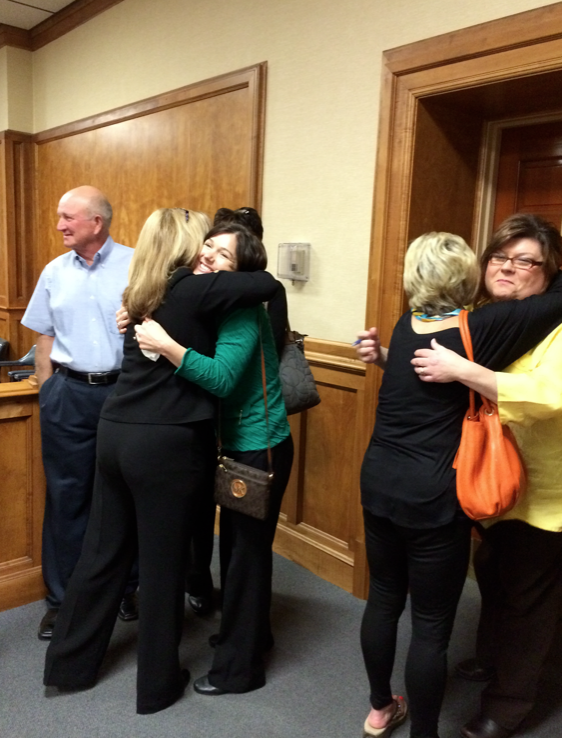 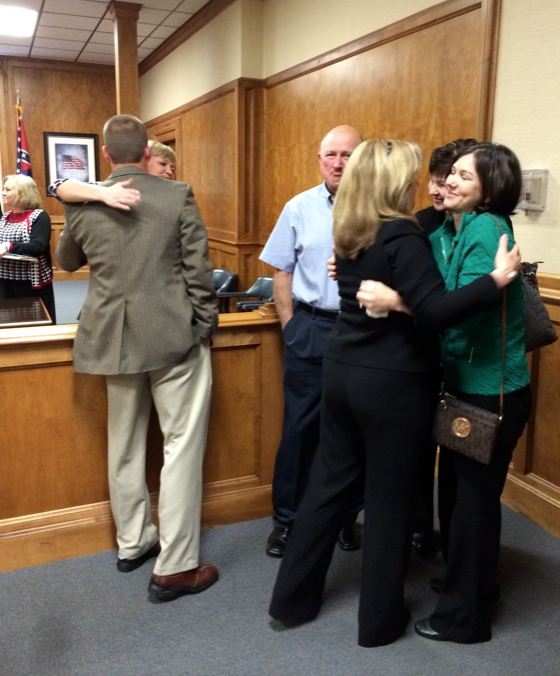 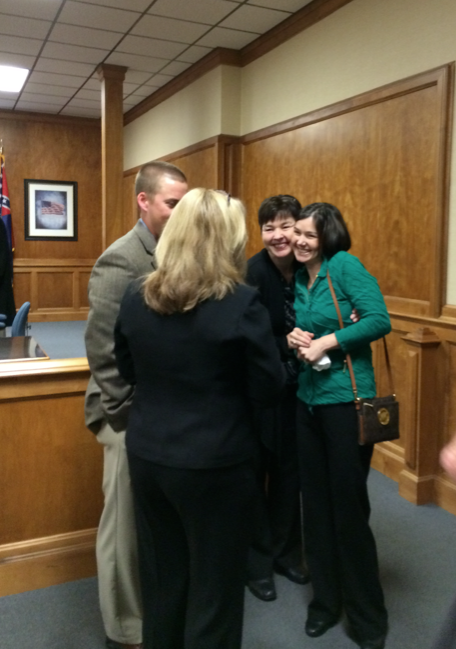 Mr. Moss said, “I love adoption hearings. I get more sugar than I did at senior prom.”

The judge held Walker up for a photo. 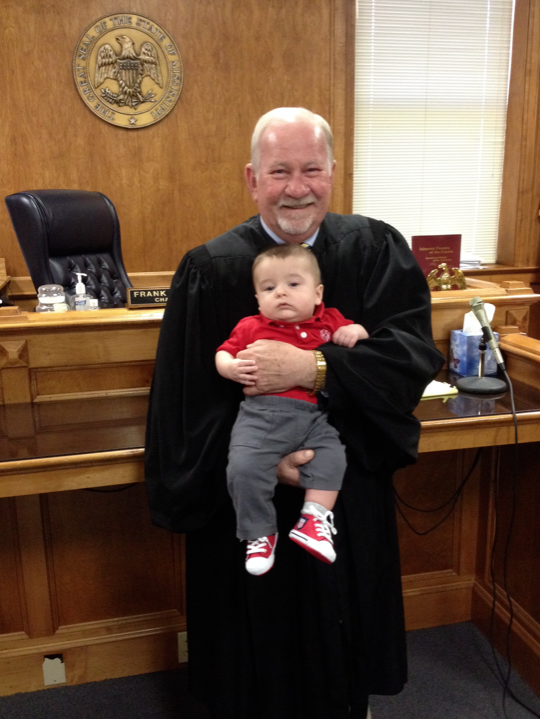 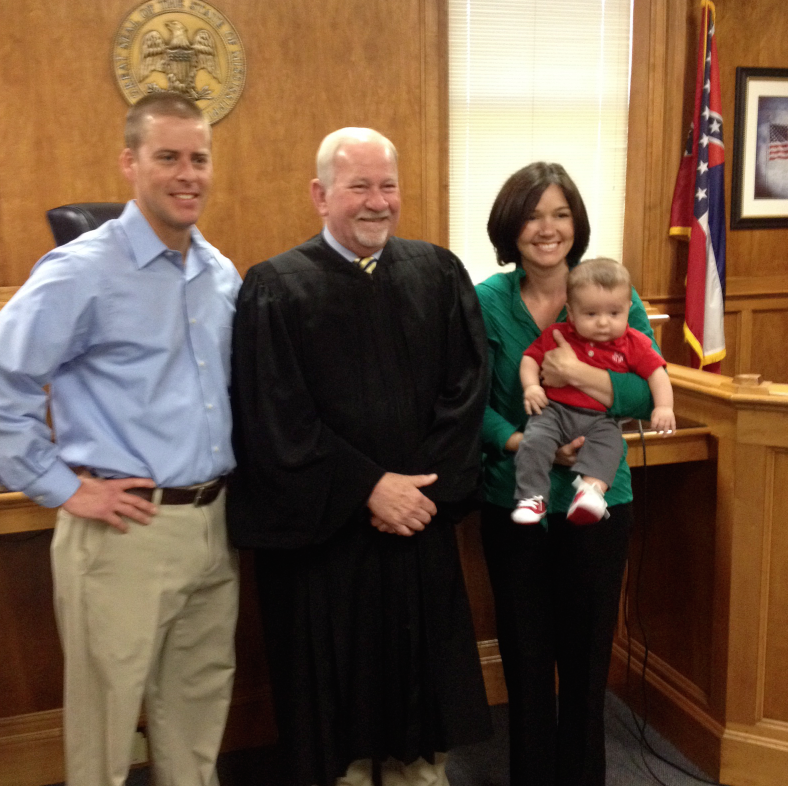 We cried. We were stunned. 5 months of worry, solved after 10 minutes in court. 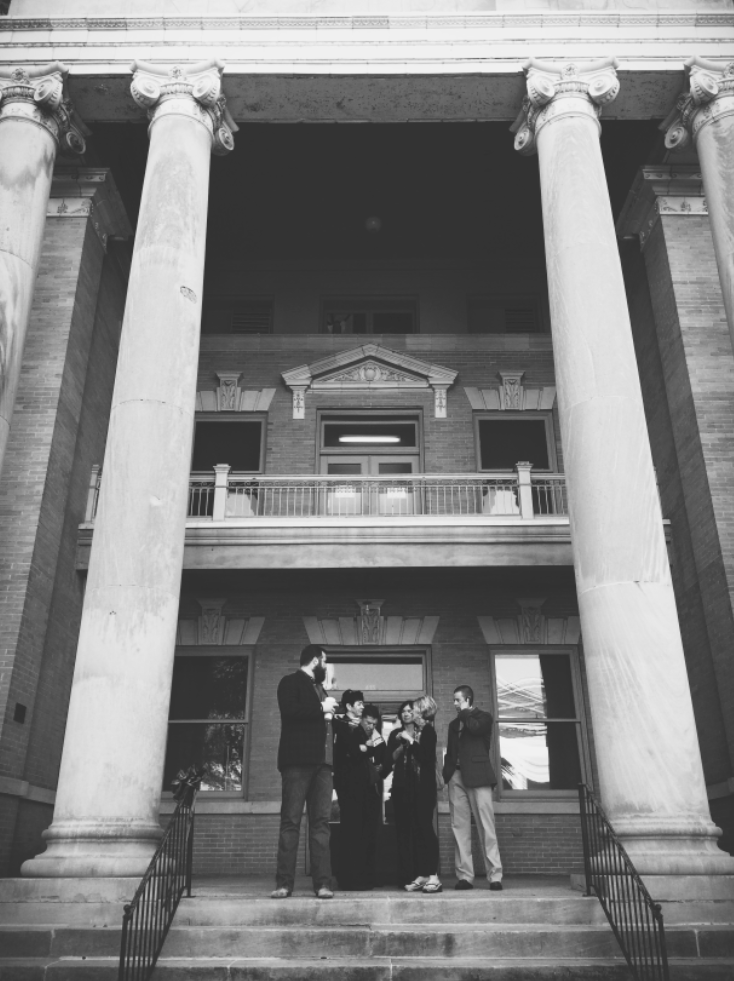 Of course Aunt Cheryl was there, ready to celebrate: 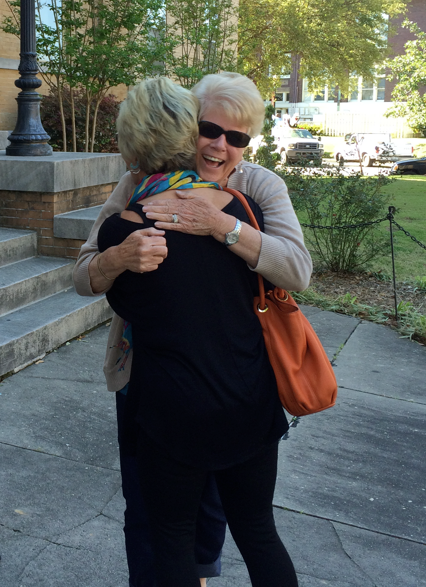 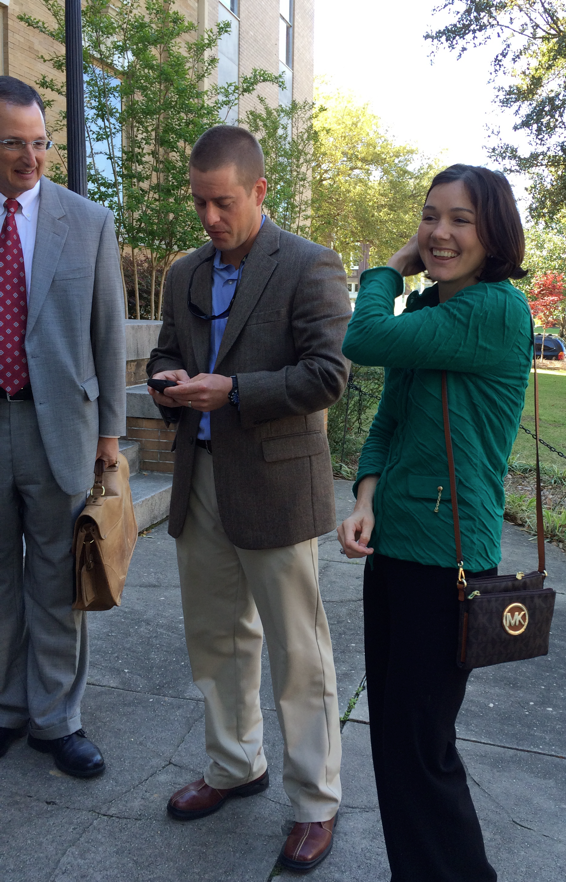 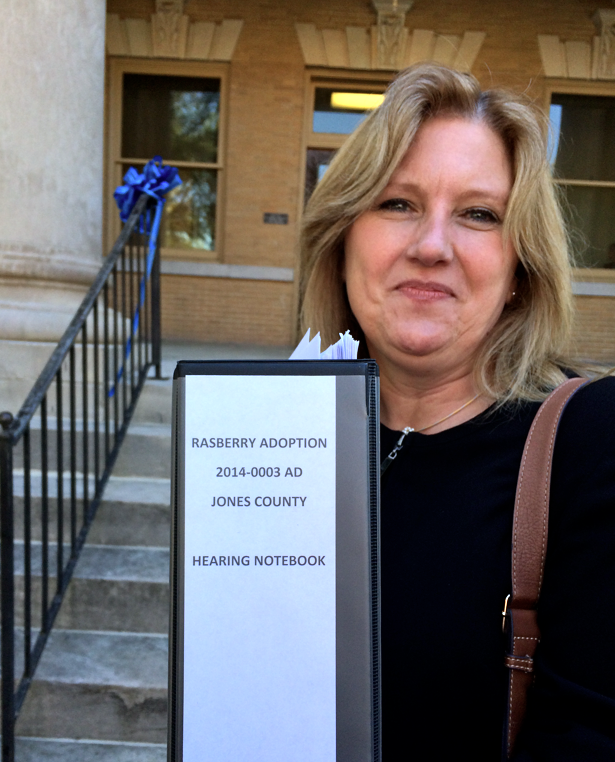 Shirley, their case lawyer working with Mr. Bob was all smiles for the first time in weeks. 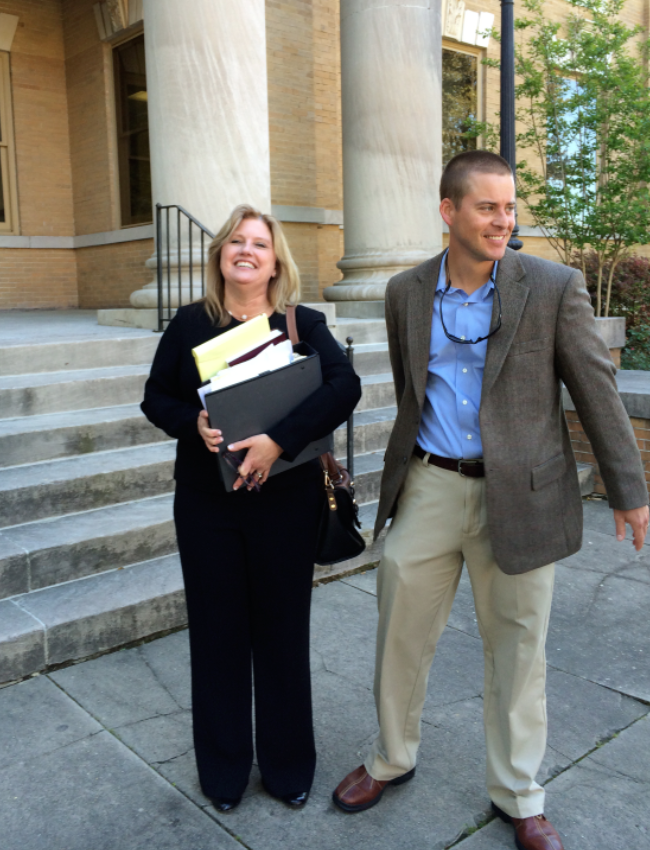 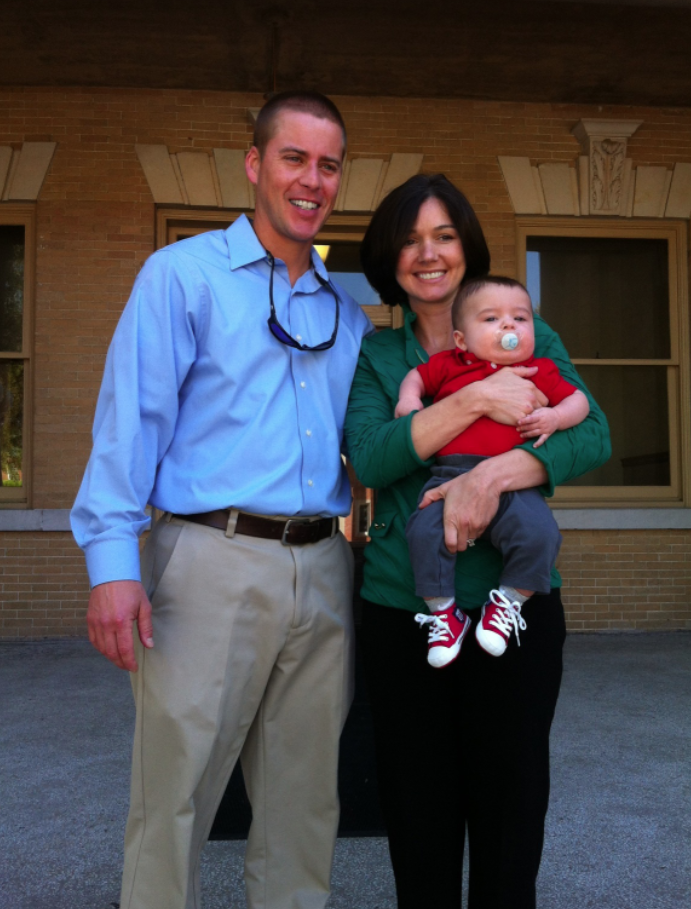 Because Ben and I live in town, our house is always the central meeting point for my family, the county dwellers who come to town for work every day. We all met on the porch for a celebration. Clark and Amanda haven’t slept in days, but today they could breathe again. And laugh. There was fried chicken and champagne. 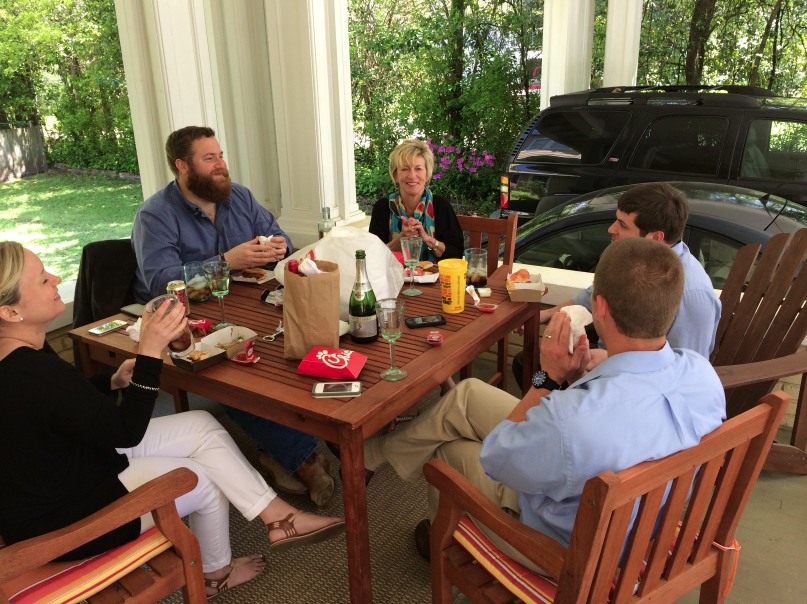 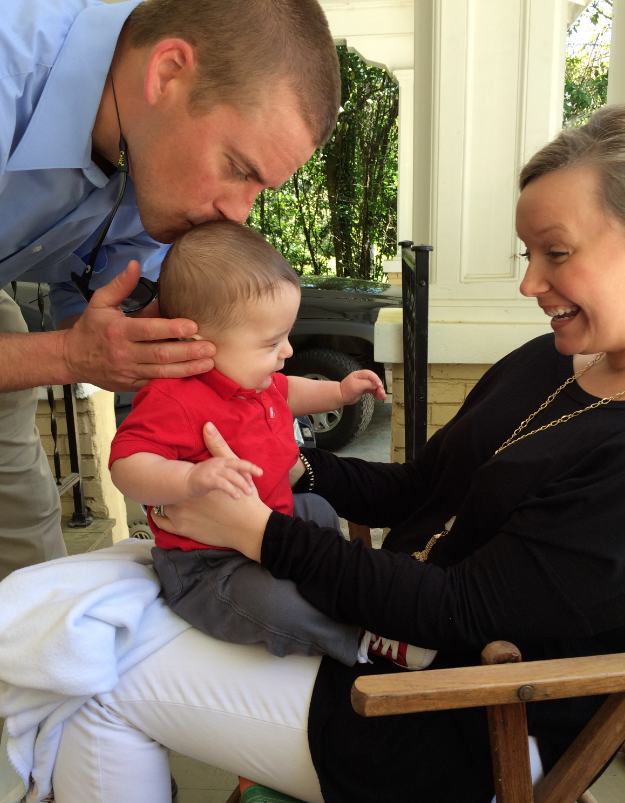 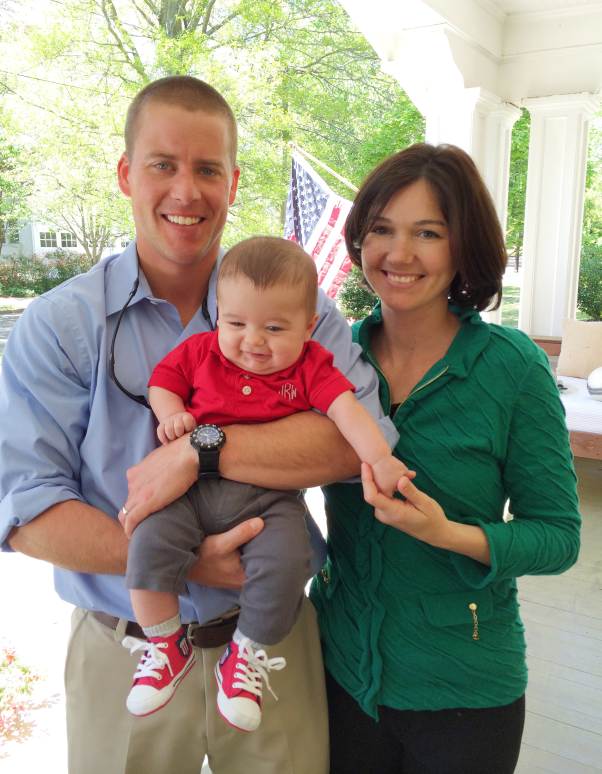 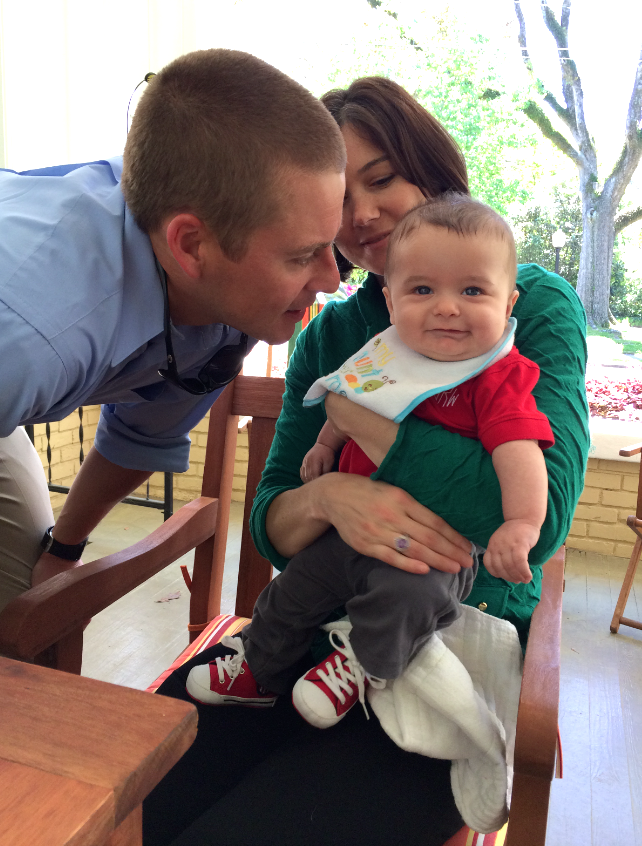 Last night my Streams in the Desert devotional for April 9 said this:

“So all things are working for the Lord’s beloved;
Some things might be hurtful if alone they stood;
Some might seem to hinder; some might draw us backward;
But they work together, and they work for good,
All the thwarted longings, all the stern denials,
All the contradictions, hard to understand.
And the force that holds them, speeds them and retards them,
Stops and starts and guides them—is our Father’s hand.”

I felt hot tears welling as I read those words.
This is my brother and his son, John Walker Rasberry: 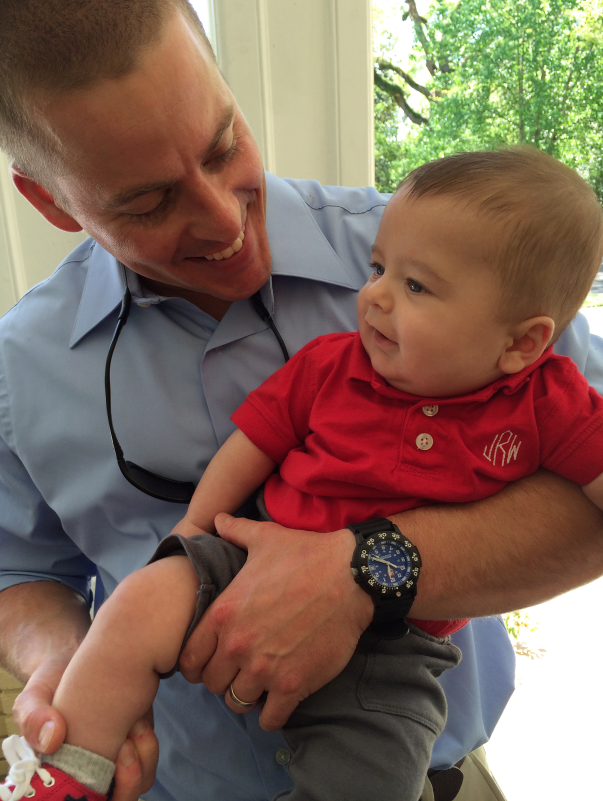 Now that everything is final and permanent forevermore, you’ll be seeing a lot more of him here.