We woke up to a cloudy, dreary day at the beach. Which didn’t stop Ben from having his breakfast out on the balcony, DANGIT.

But on a dreary day, what else can you do except go to the outlet mall? We spent the majority of the time in Osh Kosh B’Gosh, oddly enough since Samuel is due in November, Lucy is a well dressed sort of gal, and I got carried away looking for things for Walker. I found this adorable outfit, but did not buy it. I won’t share what I got him since Clark is probably reading and that would just ruin the whole surprise. 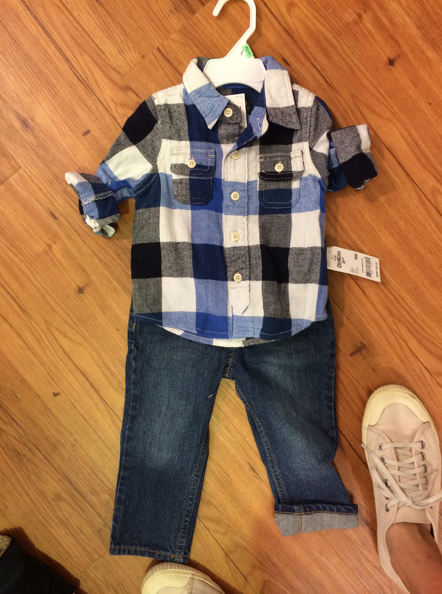 But he’s gonna be a cool lookin’ dude this fall.

After a long morning spent shopping, we headed back into Florida to Innerarity Point to have a late lunch at Hub Stacey’s on the Point—a tavern we stumbled upon by boat that was tucked into the Spanish moss covered live oaks right on the bay when I was in high school where I had the greatest grilled cheese of my life. I never forgot it. 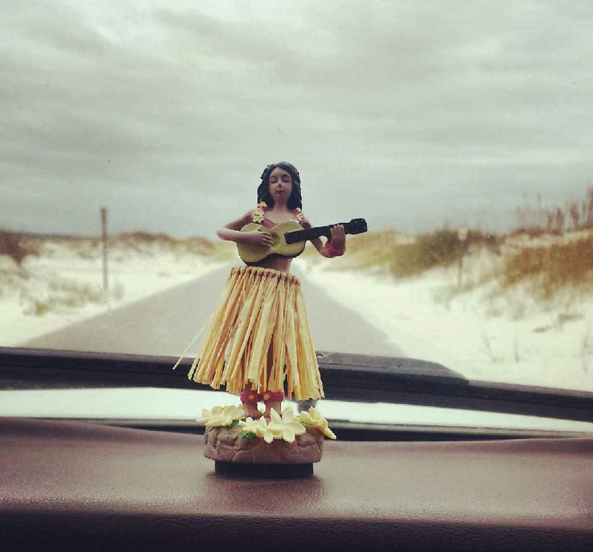 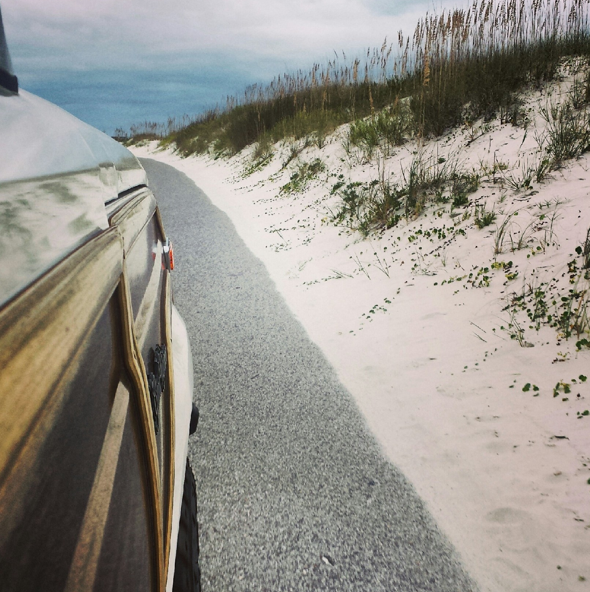 When we found it last night after riding around the point, we had to go back so I could try it again. And it was everything I remembered. Sourdough bread slathered in a garlic herb butter, cooked on a griddletop with ooey gooey American cheese. I wish I had thought to take a photo, but I didn’t have my wits about me. We all agree—they make some of the BEST cheapest grilled sandwiches in the world. 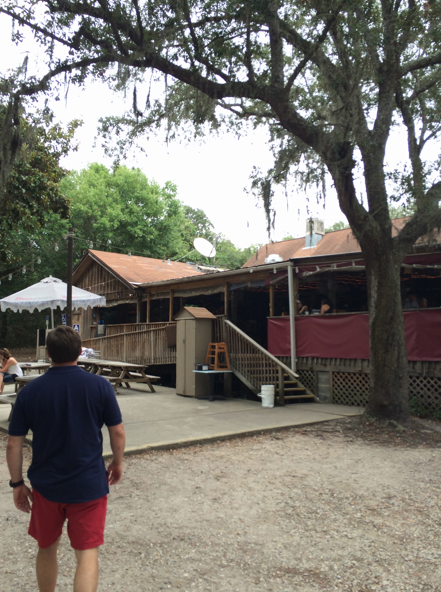 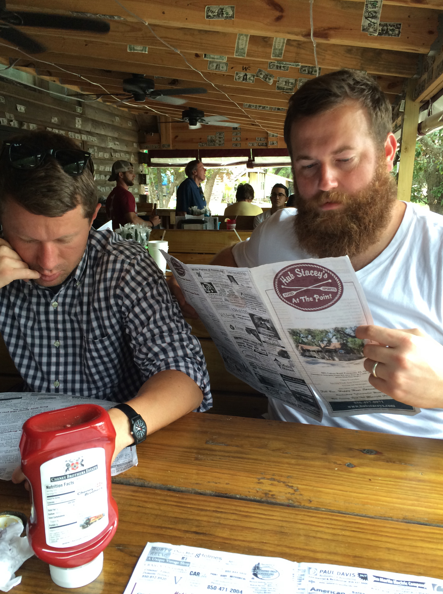 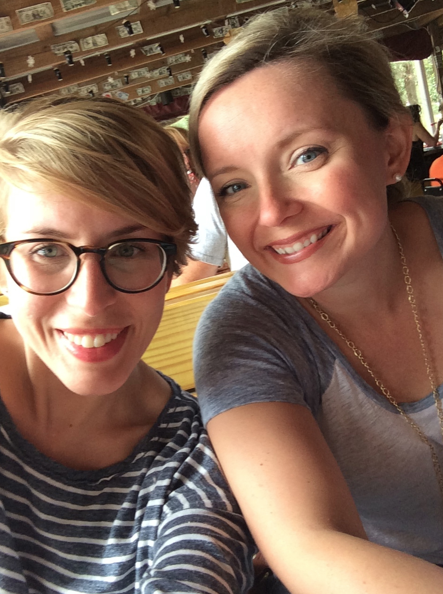 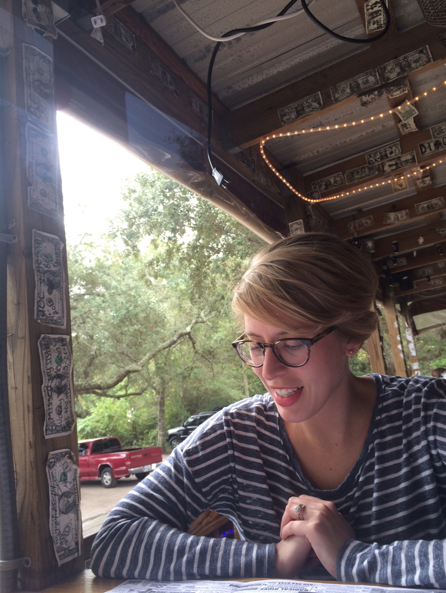 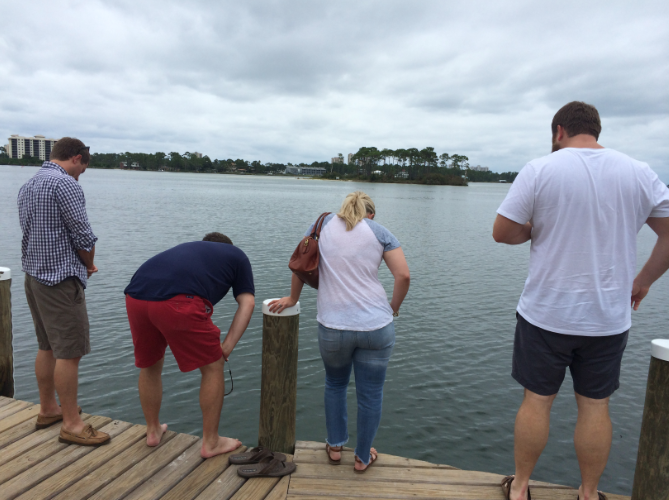 I realized while we were checking out things on the Hub Stacey’s dock that it’s been so many years since I saw the man my family lovingly called the Polka Dot Man—an older feller with a long, wiry white beard, his skin the color of my favorite leather bag, wearing nothing but a thong and found every single day rowing his red and white polka dotted flat bottom boat up and down the river—usually with his dog and a boozy sun-drenched bleach blonde woman in tow, too. He was the mascot of my summers—a man we never were close enough to speak to, a legend in Perdido Key.

I went back into the tavern to ask the bartender about him. I said, “You probably won’t know what I’m talking about, but there used to be a man who would—” and he cut me off, “row up and down the river in a Speedo? That was Roger.”

I asked, “What happened to him? Is he still around?” He told me he passed away a couple years ago, and there was a big memorial service for him with a party and his old boat there for photos at the Innerarity Point Restaurant. I found these photos of him on a local photographer’s memorial website to him, Roger McNew! 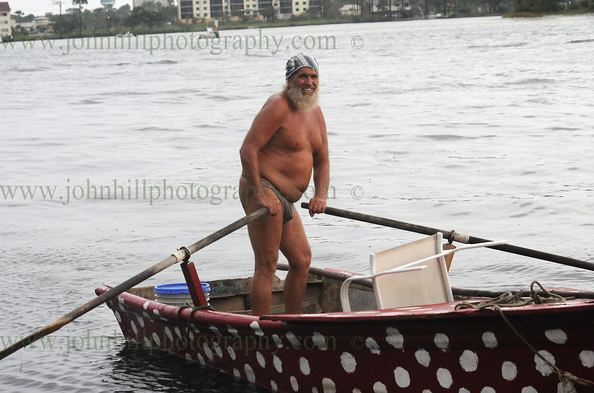 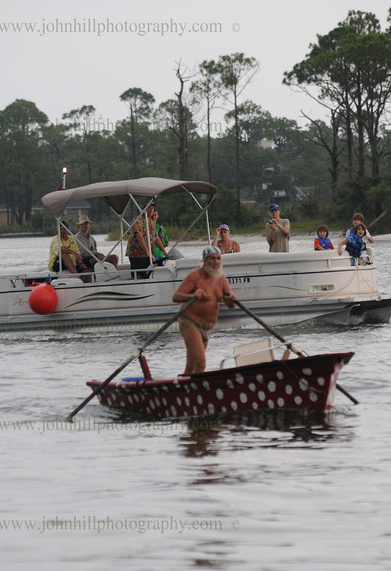 After lunch I was all kinds of excited because we headed to the movie theatre to finally see James Gandolfini’s last movie, The Drop. Y’all know my feelings for JG. Just the love of my life, is all. The movie was very good, suspenseful, but it made me sad to see him as that character—he was very tired, old, depressed. I wish the sweet, endearing Albert from Enough Said had been the last word for his acting career. I’m still glad I got to see it, though. 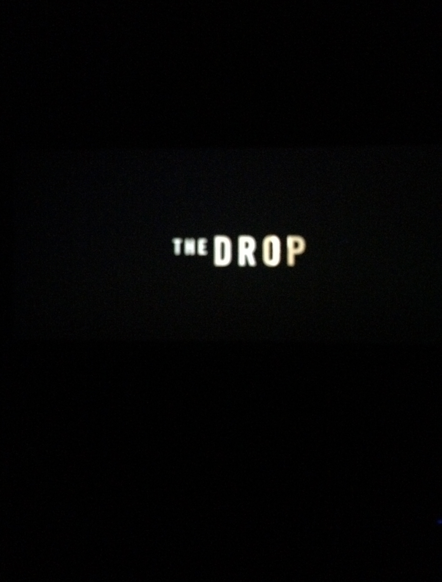 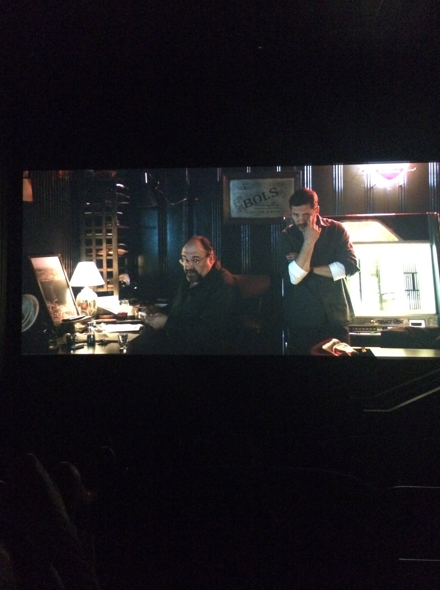 At the wharf, we did some hanging out, got some gelato, and did not do any Ferris wheel riding, though decided it would be a good photo opp. 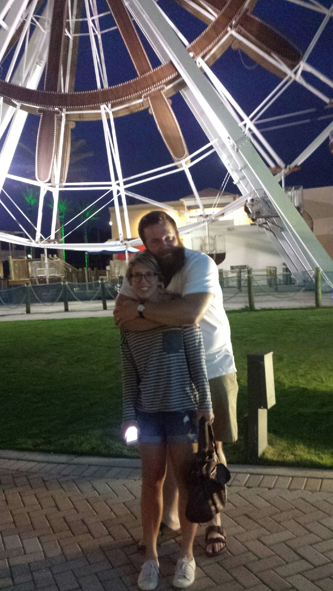 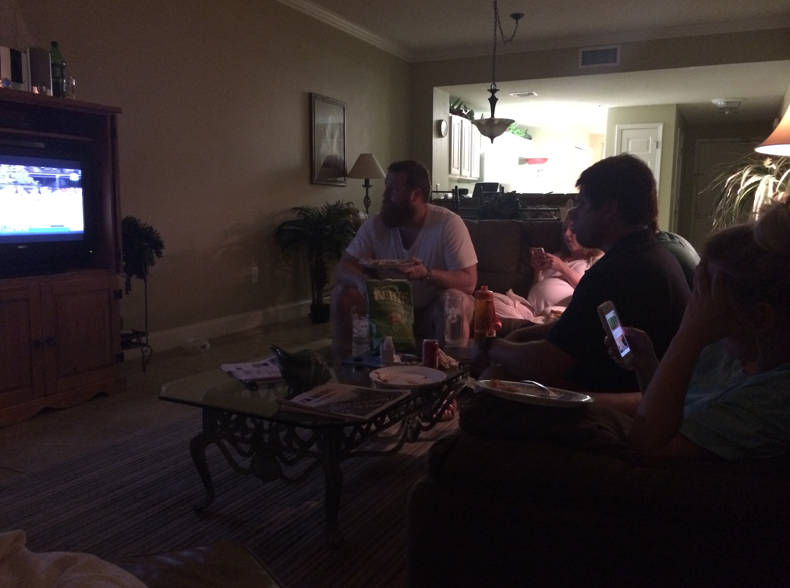 And after ordering delivery of some of the best pizza in Florida from Lillian’s, we watched Ole Miss beat the dress off of Memphis. It was the most perfectly relaxed vacation and I’m already mourning these lazy days with our best friends in the world. But really, as long as we’re all in the same neighborhood, every day feels a little like vacation.

P.S.
The snake was recovered on the ground floor behind an AC unit. Mallorie and Ben planted it between couch cushions under Mallorie’s charging phone.  On our way out the door to the movie, she asked sweetly, “Jim! Can you grab my phone off the charger?”