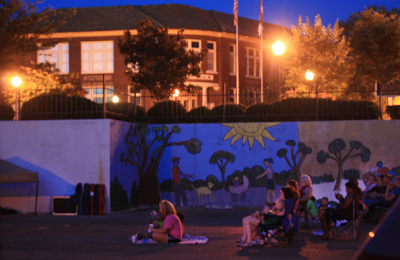 For the summer, one of the downtown churches is hosting a movie night every Thursday below Pinehurst Park, just around the corner from our front door. After 6 o’clock, it’s perfectly shaded behind the Laurel Little Theatre. That’s where they put up a big movie screen and the movies start at 8. We only went to the early show to watch The Sandlot but Star Wars was starting when we left at 10. It was such a perfectly summerish thing to do. 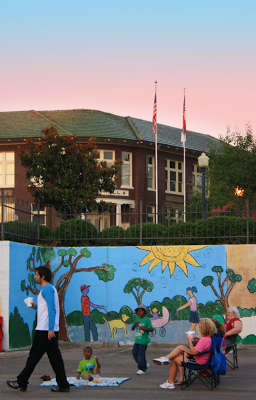 We opened the trunk of the Tahoe, let the windows down and turned the bench seat around in the back, then bought snowcones at the snack stand before the show started because it was still a very balmy 90 degrees at 8 o’clock. As the 20th Century Fox drumrolls sounded, I scooted up next to Ben in my cut offs and savored my $1.50 frozen green apple slush. Beat that, movie theaters.
Earlier today, Ben and I started a new language while standing in the kitchen. We, for no reason at all, just carried on normal conversation in the lowest tones — just barely below a whisper, really more like mouthing the words as vaguely as possible but acting like it was easy to understand. It was hysterical to us. We couldn’t say much before we’d get cracked up and laugh loudly, “I really think it’s time for you to shave. Your beard scratched my eyebAHAHAHAHA”. We started doing that again while we were waiting for the show to start. Try it sometime — you’ll love it. 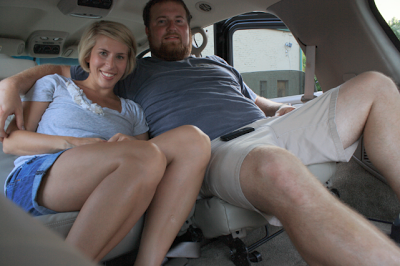 Some of our youth group kids eventually wandered up, and I think a couple of them had never seen this movie. Tragic. I hope they loved it like we did as kids. 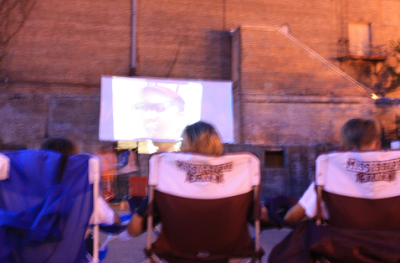 (I never could get the screen to focus once it got dark. Oh well.) 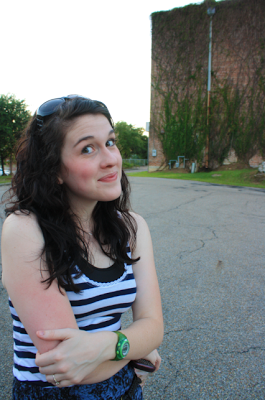 Join our mailing list and stay up to date on deals, news and events happening at LMCo. Home.