Skip to content
Buy One Get One FreeAmerican Made Flannels
Always American MAdeRead Our Story
On December 7, 2004, I woke up and went to class like any other Tuesday.
In a yearbook meeting, it had been decided by the staff that we would write 10 articles for the book on the most interesting people on campus. The first choice was unanimously Ben Napier, and I said “I can be there for the photoshoot if I need to be. It’s no big deal.” I was thrilled by the idea of spending an afternoon with him, whether he paid me any attention or not. I mean, my roommate and I would have dinner in the union sometimes if we passed by and saw his car parked there. He was just such a fun person to watch, to be around. He made anyone he spoke to feel like they were special.
Ben went to the yearbook room that morning to find out about the photoshoot and the article. When he walked in the room, 2 other girls were already talking to him, laughing, flirting. He was wearing a blue t-shirt over a white long-sleeve shirt and old worn out khaki shorts with red white and blue Adidas sneakers. I walked by and he reached out for my arm—for a hug (!!!!), and I, ever coolly, gave him a one-arm side hug. We were only acquaintances who had spoken 4 times total, but he said “two arms, please!” He wrapped me in a hug. For the first time I noticed how very big he was—6 feet 6 inches and nearly 300 pounds. I felt as small as a bird. I could smell the laundry detergent he used, his cologne, and I melted. We walked back over to my desk to think of ideas for the photos, and we decided he should get a crazy outfit for the picture—something really bizarre—and he thought of Will Ferrell as Robert Goulet on SNL. 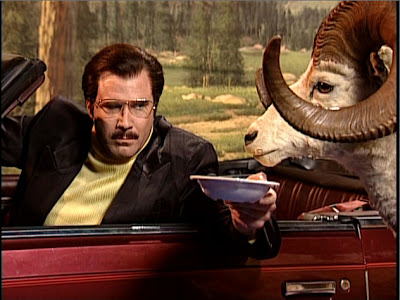 I turned on the charm as much as I could and did my best impression of a girl with tons of confidence. He made me laugh, I made him smile. I wondered if he talked this way to every girl he met.
That afternoon he and his roommates, Chase and Barron, went scouring the Hattiesburg thrift stores for the perfect ensemble. As soon as he left, unbeknownst to me, he was calling around trying to get my phone number. He called a couple people, including my roommate whose phone number he had, and she hung up because it sounded like a prank caller. In my boldest move ever, I got out my cell phone and dialed the number that had just called her. He said “hello?”, and I wouldn’t tell him who I was until he guessed. He guessed on the second try but I denied it and kept the game going—anything to prolong the conversation. After I finally told him it was me, he said he wanted to come by and show me the clothes he found for the photoshoot and asked if he came by my dorm, would I come out to see? I said, “sure. I’ll see you then.”
I only halfheartedly believed he would really show, and was taking a nap before my shift at Bath & Body Works. Kristen ran into our room and said “Ben Napier’s coming over! Get dressed! He wants us to come outside!” I rushed to throw on my cutest long sleeve black scoopneck and khaki trousers for work, checked my hair and makeup and came outside to find Ben leaning against his car, dressed in a hilarious wool Christmas sweater with sunglasses and a pipe.
Of course—he was talking to the girls from the dance team that lived in my building. Of course—they thought it was hysterical. He and I talked a while about everything: our majors, my jobs, his roommates. I, a damsel in distress, asked if he knew much about cars. I didn’t know at that time what a car obsessed family he comes from, but he said “I happen to know a lot about cars. What do you drive?” And I showed him the dent in my car that had been bugging me. He bragged that his dad could probably fix it, that he can fix anything on a car. Eventually, it was time for dinner and I was very quietly pleased by the fact that he asked me to join him in the union before I had to go to work. I was so nervous, I couldn’t eat a bite. I was trying my best to make a good impression, to make him like me without letting him know what I was thinking of him. A girl came to the table and started a conversation with Ben, ignoring me. He talked to her for a minute longer before she asked him: “do you know my name, Ben?” He was at a loss, so I whispered her name to him. To test him, I asked him the same question. He said, “Erin Jacqueline Rasberry.” My heart sang.
Rather than sit with his friends, he was careful to choose a table away from the crowd. We were sitting alone, just the two of us before people noticed and started sitting where we were. Once it started getting crowded, I told him I was leaving for work and he tried his best to make me stay just a minute longer. I couldn’t stay but I would rather do anything than leave. He was going to a Bobcat Brigade Christmas party that night, and I would be pushing bubble bath at the mall until 9. Hope came to see me at work and I told her about my afternoon—that I had spent it hanging out with Ben. She was so excited for me.
After work that night, my brakes made a funny scraping sound when I was leaving town. I knew there was absolutely nothing wrong with it, but I made another bold move by calling him up since he apparently knew a lot about cars. I was on my way to see Charlie in Hattiesburg, and I thought it couldn’t hurt to share that information with Ben. I called and he answered on the second ring. He assured me my car was probably going to burst into flames unless I drove it to his house so he could check it out. I loved so much that he asked, but I explained I couldn’t bail out on my plans with Charlie. He said he would forgive me as long as he could drive my car after the photoshoot the next day and check it all out. I agreed that that would be just fine. He kept texting me all night, even while I was watching Mystic River with the guy I was dating, but I didn’t have text on my phone so I never replied. I made it back to the dorm where Kristen was sound asleep and I lay there in my bed thinking of Ben and what the afternoon could have meant. The next morning, Kristen told me he had been texting her all evening while I was at work and my heart sank. I figured I was not special after all, that he must give every girl he knows this same attention. The circumstances were a little different than it seemed, fortunately.
Newer Post Older Post
Back to Journal