Skip to content
Buy One Get One FreeAmerican Made Flannels
Always American MAdeRead Our Story
“They’re after me.”

Early Wednesday morning, December 8, 2004 my phone beeped and woke me up with this simple text message from Ben Napier. I relished the opportunity to call and ask (with a gravelly, sleepy voice that I tried my best to disguise)

He told me it was an inside joke with he and his roommate Chase—from a psychology video that semester where a crazy person thought monsters (called the Casheestees) were after them. Well, okay. I thought as long as you texted me, I’m thrilled that the Casheestees are after you. Can you imagine what it would feel like to suddenly become friends with your favorite celebrity? The way my 19 year old heart felt was akin to that. Giddy would be the perfect label for that.

I ran into Ben that morning outside of the humanities building and we didn’t say much to each other. I deflated a little, but felt better when he said he’d see me (only me, not the friends I was standing with) at 2:00 for pictures.
Kristen and I went to the yearbook room to meet Hope and Matt, the photographer at 1:45. True to his word, Ben and his entourage of friends showed up on time with a chocolate labrador puppy in tow. Ben felt it would add to the creative vision if he held the puppy in the photos. It would make the whole thing more “majestic.” Off we went to the lake on campus to shoot the photos. I got in the car with Matt, assuming Ben would do the same since they were friends. Ben got in the car with Kristen, assuming I would of course be riding with my roommate. Deflation. We got to the lake and Ben and his buddies decided it would be hilarious if he waded into the lake in his sweater and sport coat, with the pipe and puppy for props.
Listen y’all—I have ALWAYS loved the funny guy. When the funny guy walks into a room, people hold their breath to see what he’ll do. Guys love him. Girls love him. When the funny guy is also the tallest, biggest and friendliest person in the room, it’s unbearable to not be his girlfriend. It would be so perfect for me to date the funny guy because I don’t like to be the center of attention—I’d rather he do all the talking while I stand by his side. I wanted to date this funny guy. Oh, did I ever want to. 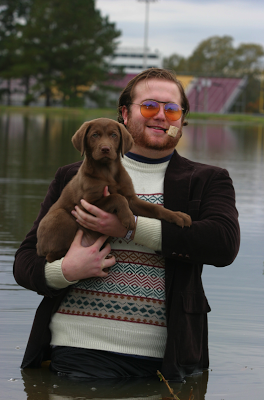 I remember that he was wearing black gym shorts and Puma sneakers with this outfit. He’d gotten rug burn on his knees by sliding on them dressed as Santa Claus at the party the night before. He kept yelling “I’m gonna get a staph infection in this mud, y’all! Hurry up!” 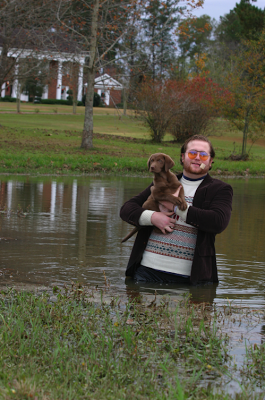