Skip to content
Save 20% On Candles & ScentsCode: CANDLE20
Free shippingOn all orders over $99
Save 25% or MoreOn Remaining Holiday
Tonight, Ben’s going to be guest blogging since I can’t know what it was like on his side of things on boring days while I worked a 12 hour shift at the pharmacy:

On this morning, six years ago, the sound of a bell woke me up. It was very early in the morning. I laid in bed for a few minutes gathering my thoughts, coming to my senses, and trying to decide where the sound was coming from. My phone was gone, so that couldn’t be it, my radio was turned off, and it hit me. The doorbell! I had never heard that sound in four months of living at the grey house. I threw off the covers and ran out of my bedroom wearing only my lucky Duke basketball shorts that I had owned since my sophomore year of high school. I knew that there was only one person that would’ve rang the doorbell that early on a Saturday, and I really wanted to see her. Erin worked the weekend shift in the hospital pharmacy. From seven to seven Saturday and Sunday, we would not be able to talk much. I opened the door to see her little blue Bug pulling away from the stop sign at my street corner. My still groggy mind told my legs to run after her. So I took off. Barefoot and shirtless in the December cold, I sprinted across the driveway, through the yard, across the street, and into the next yard. As she tipped over the hill on Court Street, I decided to turn back and call her from Chase’s phone. My mind was more awake now, and it realized the stupidity of running barefoot across the carport, yard, and street. Inside, I called her from Chase’s phone.

“Please come back,” I begged. She couldn’t come back or she would be late for work. I had missed my chance to see her. Chase and I lounged around the house till lunch only to discover the union cafeteria closed early. We rode to Popeye’s in Laurel, and I talked about Erin the whole time.
“I really like her, man. She’s so cool. Her short hair is so hot. What do you think about her? I think things are going to get serious with her. All I want to do is be around her. Can we go see her after we eat?”
I’m sure it was boring to him. Guys don’t talk about girls. I mean, we talk about girls, but not about relationships. And anyway, I was against serious relationships. Erin was different though. We stopped by to see her for a minute at the hospital. It was like torture. I wanted her to walk out of there with me so we could spend the whole day together. We decided to meet when she got off work. It was time I gave her something very special to me. We were too old for class rings and letterman jackets, but I wanted to give her something. I wanted her to know that she was special—my girl. My high school basketball sweatshirt would be perfect. I was waiting for her when she got off work, but I was too nervous to give it to her then. We went to Wal-Mart to buy wrapping paper for her mom. We played a game of waiting in the longest line till we were almost to the register, and then switching to another long line. This was so that we could keep flirting in public.
After this, we went to her parents house. As you know, I had already met my mother-in-law. I had already swept her off her feet. She was already planning her daughter’s wedding. She was imagining how beautiful her grandchildren would be. I had yet to meet the Good Doctor (it’s what I’ve always called him). I knew little of him other than he had played college football, had gone to Ole Miss and Jones, and he was a doctor of physical therapy. Sounds pretty awesome and intimidating, huh? I knew my work was cut out for me. I set right to my work when I got to the house.
“Hello again there sweetheart. Did you miss me?” as I hugged her lovely mama. Then into the living room to meet the Good Doctor. Firm handshake, eye contact,
“Hi Dr. Rasberry, Ben Napier. Good to meet you.”
Sat down at the chair next to him, “What are we watching here? Oh the History Channel, we don’t get this on campus. I love the History Channel.” The thing is, I really meant it. I loved the History Channel.
So far everything was going great. I was being polite and respectful just like my mom and dad raised me to be. Firm handshake with eye contact is something that we Napier boys learned early. It was right up there with “yes sir/no sir/yes ma’am/no ma’am” and not standing with your hands in your pockets. It makes you look sorry. Not apologetic, but SORRY. The Good Doctor decided that U.S. presidents would be the trivia this evening.
“No sir, Jackson was after the second Adams, and Van Buren was after Jackson,” I pointed out, thankful that Wayne Academy taught me the song about the presidents. A while later, the girls came in from the kitchen and joined us for a show about Melungeons (google it).
“Are you a Melungeon?” he asked me. The Good Doctor decided that I was in fact not one after he rubbed the base of my skull. Strange? Maybe, but I decided that it was good that he felt that comfortable with me.
Her parents turned in for the night, and I, feeling triumphant, decided to give my girl a present that wasn’t worth much, but meant something to me. “This is from when I played high school basketball. Only one other girl has ever worn it and that was only because she was cold in class. I want you to take it, so you will think about me.” I handed the black sweatshirt to her. After wearing it most of the cold months in the year we began dating, it still hangs in her closet.
That night, she took her first photo of me. She says it’s still one of her favorites. 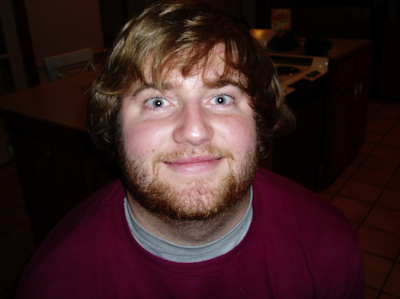