Yesterday, I went to the eye doctor for what I’ve learned is apparently akin to an ulcer on my eyeball that the friction of my contact has caused. It felt… Not great. They sent me home with some eye drops that worked like magic, and I had to come back today for a checkup appointment to make sure it was healing. Over the next couple hours I met many people that completely made my day. My week, even.

1. I waited in the waiting room for close to an hour, then decided to look at the eyeglass frames and try on until it was my turn to see the doctor. 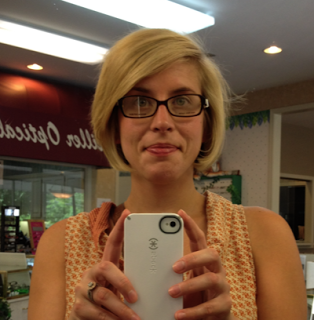 These frames were super cute. But too expensive.

A girl got my attention, the pretty redhead who had helped me a few months ago when I got new lenses for my old frames. She told me she had heard the story of Lucky Luxe, and back in January I was excited that she’d heard of us and I gave her my business card. It inspired her to start her own little business on the side, and she makes custom personalized vinyl decals and personalized children’s school supplies. She was so excited to tell me about her work, and I was even more excited to hear about it. She’s such a sweet sweet person and it moved me so much that she’s found something she loves, maybe because of my story. Maybe before long she’ll be able to leave her day job!

2. The optometrist who took me back to the doctor’s office began asking me questions about my eye, if it was doing better, then the conversation turned to how he knows some of my family and had also heard the story of Lucky Luxe from someone I’ve never met who spoke to a group of people at some point. I was beyond flattered at this point, especially since I make wedding invitations, not something popular among 33 year old guys or really anyone at all who isn’t in the market for reasonably priced letterpress. He couldn’t have been friendlier and he shook my hand twice.

3. Then I was shuffled into another smaller waiting room with 4 other people. We all began talking, me, the 21 year old girl wearing a beautiful pink and white dress, the sweet elderly man to my right who had a $12,000 cataract surgery that lasted 28 minutes many years ago, the older woman who looked like she would be an excellent grandmother who never stopped smiling even though she felt like there was a little rock stuck under her eyelid, and then there was…

4. The man who reminded me a little of Jeff Bridges who once walked out of a doctor’s office after waiting for 3 hours. Once it was down to just the 2 of us waiting to see the doctor, we kept on talking since there was nothing else to do and it would be uncomfortable not to. He told me about his daughter who was just a little older than me. She was diagnosed with breast cancer a few months ago and had to have a double mastectomy. “We’ve been blessed,” he told me, because she’s completely cancer free now but she’s taking chemotherapy just to be safe. It’s not made her sick and he’s thankful for that. I told him I would say a prayer for her tonight, and I did that very thing in my car on the way home.

After 3 hours of waiting I still hadn’t seen the doctor and it was getting late. I’d planned to take mammaw dinner at 6:00 and I was surely going to miss it. I decided I’d go on home since my eye feels fine today and I didn’t want him to have to wait on me, a perfectly well person, when he needed to see the doctor.

God showered blessings all over me today. Meeting good people in unexpected places shows His face in humanity. I hope all those people are feeling better tomorrow, and I especially hope that man’s daughter continues to heal. What a day.