Thanksgiving landing on the 22nd sort of foiled the possibility of having an anniversary like Ben normally plans, so we decided today we would spend it doing nothing but being together and doing fun things we normally don’t make time for.

To begin, we slept until we woke up. We didn’t set an alarm. We woke up at 10 am, but stayed there  talking about the things we wanted to do today. After a shower, I gave Ben his decidedly unthoughtful but cool gift, because it’s sort of hard to give a man an anniversary gift with a floral theme. 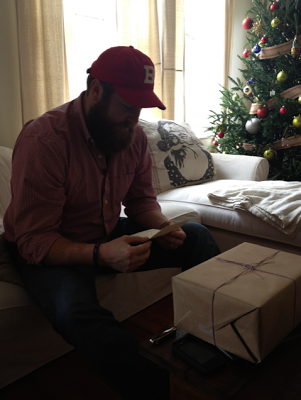 He was all excited when he realized what he was opening, but I got excited too and forgot to take a picture. So here they are, a new pair of boots, the gift I give him every other year for one occasion or another, because he loves boots SO MUCH. Y’all can’t understand. He got one of them on when I took a picture: 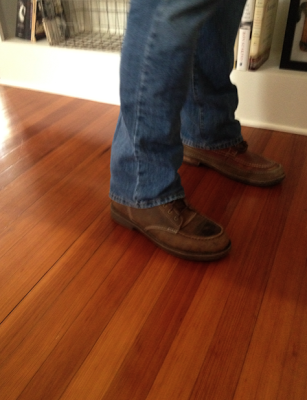 He’s got a surprise for my anniversary gift in the works, but he’s not finished building it yet. He tells me it goes with something else, a ‘set’ of sorts, and he could show me part of it but doesn’t want to until the pieces are together so I get the whole effect. I can’t wait to see what it is!

Then mama came by to give us an anniversary happy, a mercury glass candle stand. She’s been giving me mercury glass pieces to start a collection. I’m a little obsessed. 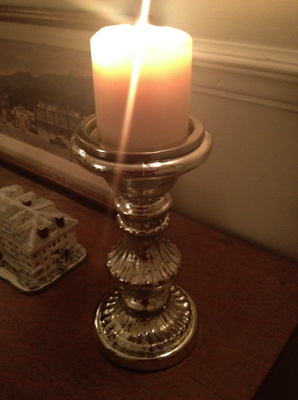 The Christmas season is officially here, and that made us want to go to the mall. Not like, in a Black Friday shopping sort of way, just to go get me some new running shoes and hand soap. Today happens to be Black Friday, but alas the Sawmill Square Mall isn’t exactly a mecca of consumerism these days, at least not to the extent of a Best Buy or Walmart. But that’s my childhood, with which I associate Christmas, so we went and had fun pretending it was 1988. Ben found the hand soap I wanted: 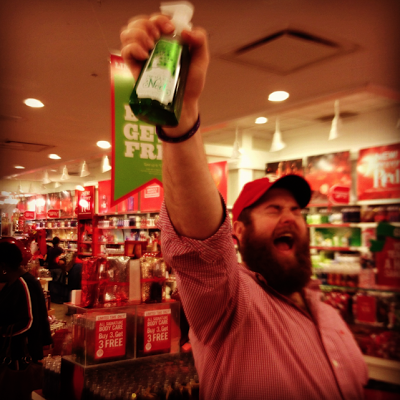 While we were in the mall, a group of high school kids asked for his autograph for a scavenger hunt. As the Loblolly lumberjack, they felt that qualified him as a ‘local celebrity.’ He was tickled by that.

Then I found some Nikes that don’t look cool but feel great at Shoe Department, so we celebrated by purchasing a cheese-on-a-stick from Corn Dog 7. Mama, look away. 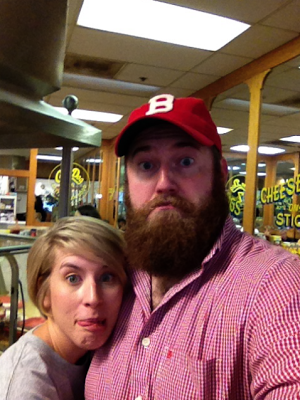 They got those banners long before I was born. Positive. Christmas music was playing, so what else do you want? 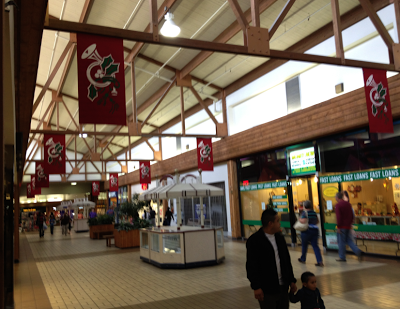 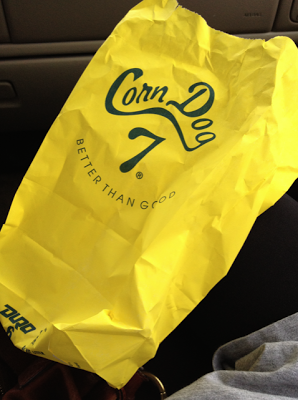 Then we hit Winn Dixie and Grocery Depot to get everything Ben needed to make his amazing potato soup. You might call it ham soup, but whatever. We always said Grocery Depot was sketchy, the way it used to look like a zombie apocalypse with the buggies all over the place, but they’ve renovated and today’s green onion purchase was a really good experience. I’m sorry I said it was the grocery store for walkers. 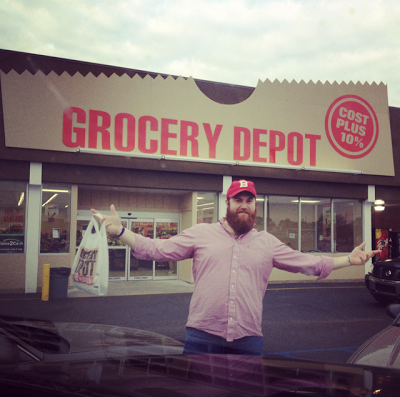 We came home and he got to work, slicing and peeling russet potatoes: 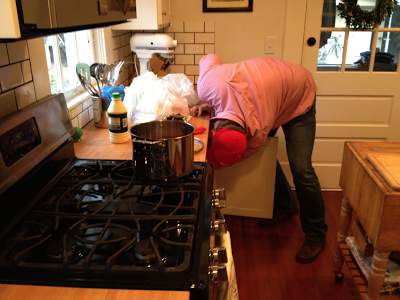 While I gave Baker a brushing. Woah. 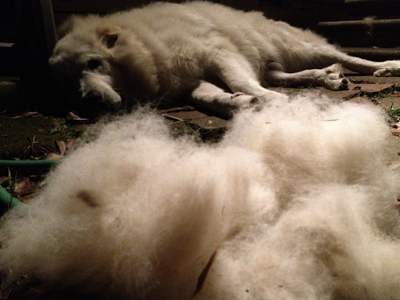 He fixed my plate while I fixed his (we happen to know that if you make each other’s food it tastes better—just like with sandwiches), then we took our supper to the living room to eat by the fire and watch a Christmas movie. I’ve never seen Fred Claus and we were feeling hokey. 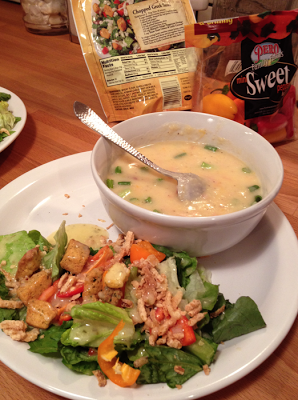 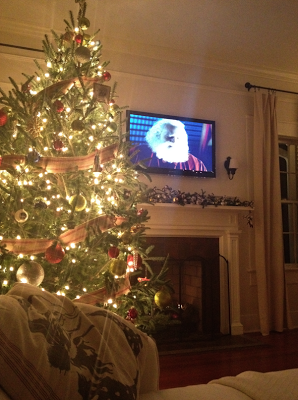 My feet have been frozen solid my entire life, and Ben always holds them to keep them warm when we watch movies. 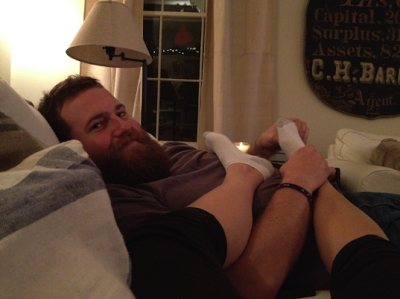 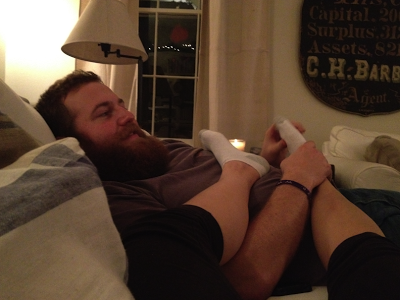 In a few days, he’ll give me my 4th year anniversary book. It’s the only present I will ever want for my anniversary, ever. I don’t care about gifts that cost a lot. Expensive gifts don’t make our marriage any stronger or equate to the way we feel about each other. The anniversary books are as close as it gets, documenting the best things that happened to us over the last 12 months, the richest and most prized moments in a year. It’s what inspired this blog, actually. Our wedding anniversary is really just a formality anyway, since we decided we would get married 6 days after meeting. That week is the most special one we remember.

This is the husband God gave me. I can’t understand it. My life would be very different if we had never met. I would have moved to Savannah, become a professional artist and probably moved even further from my roots. When we’re together, I feel exactly like myself. It feels like I am the way I was when I was little with my parents, an unselfconscious child, the way I felt with my very best friends in high school and college, the way I felt so loved and very cared for when I was in just my parents’ care, a unique and special snowflake. To me, Ben is everything comforting and warm, he’s an old Patagonia fleece pullover, my bed with mountains of blankets in January, a bubble bath, a hot plate of cheesy, saucy lasagna, my imaginary friend who knows every embarrassing secret, my favorite movie star, my old boots, my favorite book and… me. He just feels like me.

Does that make sense? I really hope you know exactly what I’m talking about.

Happy anniversary, Ben. This marriage thing’s a piece of cake, ain’t it?