Well I think all the excitement must’ve been too much for ole Benny boy. After the hooplah at the courthouse with the election results, we went to Waffle House for late night dinner. We went home exuberant, exhausted, and excited. We fell asleep. And at 3 am, Ben woke up in a cold sweat with a fever. Yikes. He’s not had any other symptoms besides a headache, but we can’t get the fever to go away which is a little worrisome. 2 siblings in the youth group’s grandfather passed away this week and we went to the funeral 45 minutes away this afternoon. I was a little worried by how gingerly Ben was moving even though he insisted he was fine, that he really wanted to go see the kids. So we went. But on the way home he was wilting fast, and while he took a bath when we got home (I know he feels bad when he takes a bath instead of a shower) I called Papa John’s. Pizza cures everything, right?! Yes, it does. I then had him drink about 3 gallons of water and Gatorade.

His temperature wouldn’t go down, but he said he was feeling much better from the bath and so we spent the night lying on the couch, watching movies and resting. We really don’t rest like we should. 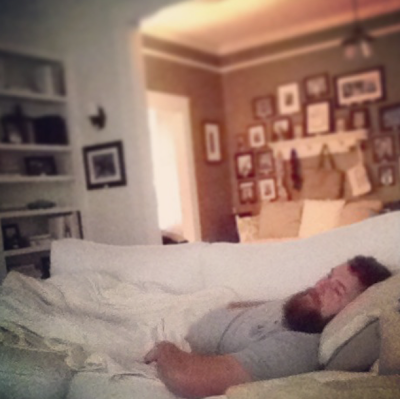 Just ask my mama who truly believes that our go go go go lives are why we get sick so often. She’s probably right.

I hope it’s just a little nothing bug that passes overnight, and it probably is. But it made an excellent excuse to be lazy on a weeknight.