A few years ago, I went over to mama’s house and found the most delicious pasta on earth in the refrigerator. They were leftovers that I’ll never get over and I asked her for the recipe before I left. She made it up that night and only made it that one time, but I’ve made it many times since and tonight I was craving those tangy tomatoes and that buttery penne. I’m feeling generous so I’ll share the world’s easiest pasta recipe. It’s vegetarian, but you could throw in some chicken or shrimp if you wanted to get real serious about it. Ben grilled some chicken, skipped the penne and heaped on the vegetables so you could do it that way too if you want. Anyway, let’s get to it! 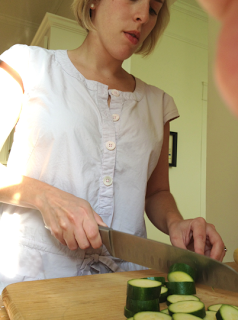 
1. Melt the stick of butter in a BIG sauce pan.
2. Sautee all the vegetables in the butter, salt to taste.
3. Boil the noodles until al dente, drain.
4. Toss noodles with olive oil.
5. Stir in vegetables and add all the parmesan your heart desires. I like the shredded kind in the little tub AND the grated powdery kind together.

This will render about 6-8 servings. 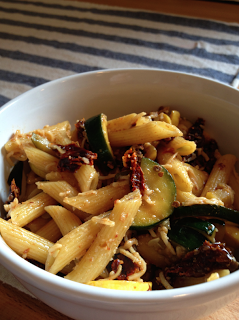 Then eat it and be happy.