So at the pup party last month, a terrible tragedy befell the laundry room storm door. Hopey’s great dane, Zoey, wanted to come inside so she made a running leap at the door which was a certain death for the flimsy aluminum and plexiglass from the 1980s. It was no match for her 100 lbs.

We got on the hunt for a storm door that next day, but it turned out to be more difficult than we thought it would be. No company has made a door those dimensions in 30 years and to have one custom made would cost nearly $1,000. FOR AN ALUMINUM SCREEN DOOR.

Which is obviously insane.

So, what do we do? You know what we do. We build one ourselves! Or rather, Ben does. I watch and design. I wanted a craftsman style screen door, but I also wanted it to keep the weather (read:lizards) out of the house. So he made me that very thing, with weather stripping, black screen and plexiglass too. He stained it to match the front door of the house. Isn’t it beautiful? 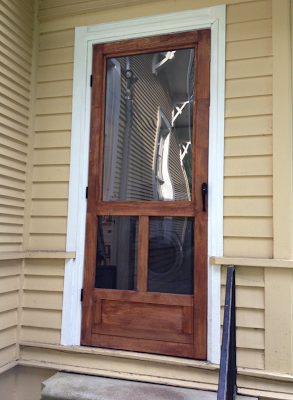 I wish I had taken a before photo, but the other one was just so bad, especially after the incident. It was Scotch taped and had tin foil covering the big holes in the glass. 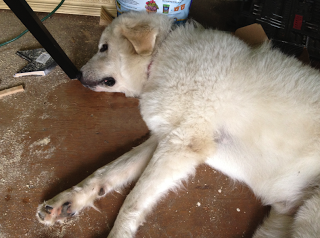 Then we went to my parents’ for a little party with the Keyes’—their best friends since they were younger than Ben and I. 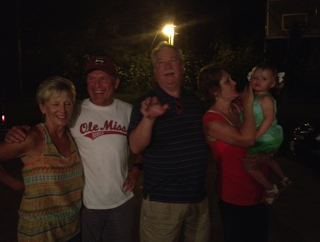 I swear they would’ve told stories until midnight if we hadn’t told them to go to bed.